Posted on Tuesday, Apr 01 2014 @ 13:45 CEST by Thomas De Maesschalck
Asian tech site ChipHell scores yet another exclusive by posting the very first photos of the actual Radeon R9 295X2 "Vesuvius" graphics card. The pictures are legit as the cooling solution looks identical to the teaser picture from AMD's Twitter account. As was to be expected, AMD decided to use a watercooling solution on this card because two Hawaii GPUs with a 250W TDP would be too much to handle for air cooling.

Exact details of the cooler aren't available yet but it appears to be a pair of pump blocks connected to a single 120mm x 120mm radiator over a single coolant loop. Interestingly, the card also has a 90mm fan in the middle of the board, this fan is probably used to cool the other components like the memory, VRM and PCIe bridge.

According to the specification sheet, the R9 295X2 features two 28nm Hawaii GPUs with all 2816 stream processors enabled, resulting in a grand total of 5632. The card features a 512-bit memory bus and each GPU is reportedly wired to 4GB to 8GB GDDR5 memory resulting in a total of 8GB to 16GB GDDR5. Final details regarding the clockspeed and power draw aren't available but the card will reportedly be powered by two 8-pin PCIe power connectors running at off-specs.

The retail pricing doesn't seem finalized yet but ChipHell claims it could be around the $1,499 mark. 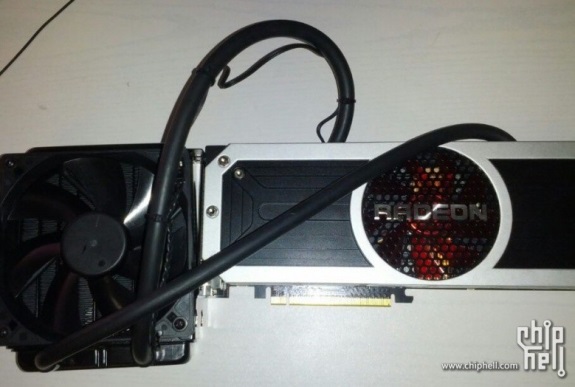 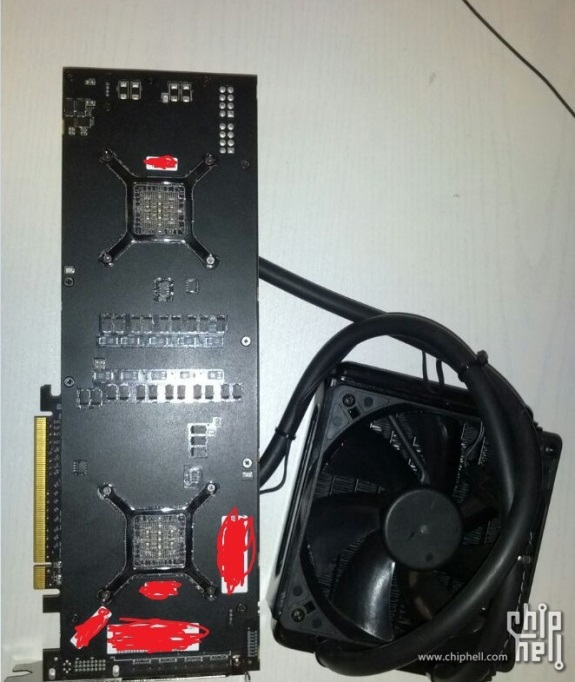