ARS Technica warns that one week before Microsoft cuts off Windows XP support, nearly 28 percent of web users are still using this ancient operating system. The combined marketshare of Windows 8.x now stands at 11.3 percent, up 0.62 percent versus the months before.

Windows 8.x was up a little on February, gaining 0.62 points, with most of the gains (0.59 points) going to Windows 8.1. But the real story is Windows XP. In spite of the imminent loss of support, it remains abundant, especially in China and other Asian markets. While firewalls and other measures will provide some degree of protection, widespread exploitation of these users by phishing and similar attacks remains highly probable. We don't know how the story is going to end, but we can't imagine it being good for anyone, with compromised machines liable to be recruited into botnets and spam networks. This writer would not be the least bit surprised if the first wave of exploits for the obsolete operating system materialized on or about April 9th. 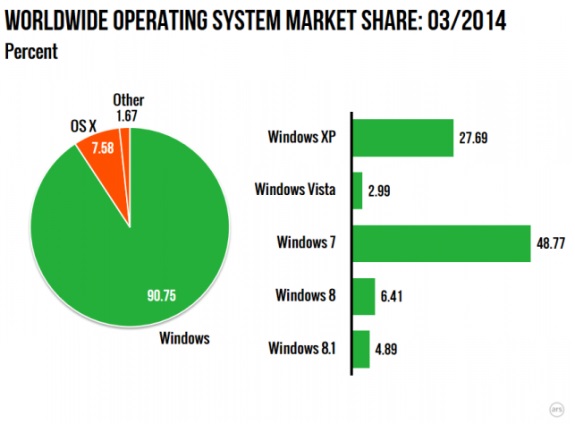