Posted on Wednesday, Apr 02 2014 @ 21:00 CEST by Thomas De Maesschalck
VideoCardz got its hands on leaked marketing slides that reveal the specifications of AMD's upcoming Radeon R9 295X2. This dual-GPU beast features two Hawaii XT GPUs, totaling 5632 cores. Each GPU has a 512-bit memory bus and 4GB GDDR5 memory, resulting in a total of 8GB GDDR5. The core is clocked at 1018MHz and the memory has a frequency of 5000MHz. Power delivery is via two 8-pin PCIe power connectors and the board has a TDP of 500W!

Cooling is provided by a liquid cooling solution from Asetek:

The R9 295X2 is the first reference AMD graphics card to feature liquid cooling solution. Compared to ASUS ARES II we have a radiator made by the same company: ASETEK. By default R9 295X2 has one 120mm fan installed, but there’s nothing keeping you from installing a second one (I don’t see another fan to aid in cooling for push pull).

The radiator is connected with the pumps with two 38 cm rubber tubes. The cooler on the card measures exactly 30.5 cm, and it also features a single fan in the middle. This reddish element, and the Radeon logo on the side, are the only reminders we are looking at AMD card, because nothing else is red. Either way, both elements are illuminated. 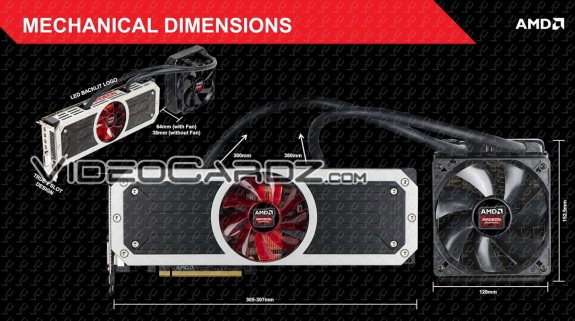 Performance-wise AMD claims the R9 295X2 is about 60 to 65 percent faster than a single R9 290X in 3DMark Fire Strike. The Radeon R9 295X2 will be officially unveiled on April 8th. Pricing is still unknown though.