Posted on Thursday, Apr 03 2014 @ 16:15 CEST by Thomas De Maesschalck
Club3D introduces its Radeon R5 230 lineup, it includes a 1GB and a 2GB DDR3 model. Both versions are equipped with a passive cooling solution.

The R series consists of the R9 high performance graphics cards targeted at the most demanding PC gamers. Next is the R7 series. Cards in the R7 series are capable allrounders with the power to do it all. So far there was no part of the R series aimed at entry level cards. This is about to change with the launch of the Radeon R5 series.

Integrated graphics solutions in modern CPU’s are getting increasingly powerful but there remains a strong demand for discrete entry level GPU’s to either use for new systems or to upgrade the graphic performance of existing systems. In the Radeon R5 series we will launch three different SKUs, all of which are passive cooled to ensure completely noiseless operation.

It fully supports DirectX 11 and Open GL 4.2 and uses a mere 19 Watts under load. The card comes standard with two Low Profile brackets allowing it to be fitted in most Small Form Factor (SFF) chassis.

The main difference is the increased memory size of 2048Mb to offer more headroom when using heavy applications.

The R5 230 2Gb also uses a passive alloy heat sink without a fan to ensure noiseless operation. It ships with two Low Profile brackets for use in Small Form Factor (SFF) chassis or HTPC configurations.

This is a more specific version because of its 1X bus. PCI-E stands for Peripheral Component Interconnect Express.

It’s a high speed serial computer expansion bus and basically comes in 4 physical variants, X1, X4, X8 and X16. Most common slots used on current motherboards are the X16 and X1 versions. The big advantage is that X1 cards can be used in any PCI-E slot, from X1 to X16 specifications.

Therefore this is a very flexible solution not only for use in mini PC’s featuring a PCIe X1 slot but also for use as second or even third graphics card in ‘normal’ sized (micro) ATX systems. The Club 3D Radeon R5 230 PCIE 1X also comes with the Caicos PRO GPU offering 160 Stream Processors, a clock speed of 625MHz and 1024Mb of DDR3 memory at 1334MHz. It is passive cooled, uses only 19 watts in load and comes standard with two Low Profile bracket.

All three Club 3D Radeon R5 230 cards feature a Dual Link DVI-D, HDMI and VGA output. The cards are expected to become available in e-tail and retail in the coming weeks. 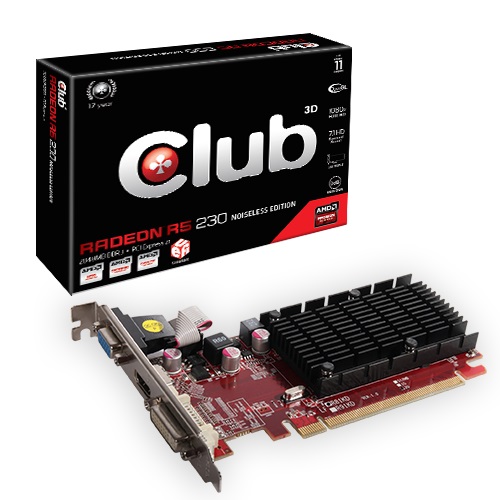