Posted on Tuesday, Apr 15 2014 @ 12:45 CEST by Thomas De Maesschalck
MacRumors got its hands on a 2014 product roadmap from Apple, created by KGI securities analyst Ming Chi Kuo. The source often provides reliable information on Apple's future plans so perhaps this roadmap isn't too far from the truth.

If correct, we can expect a cheaper iMac towards the end of the second quarter but the most interesting launches seem to be concentrated around the end of the third quarter and the beginning of the fourth quarter. In that timeframe we can expect new iPads, the iWatch, a 4.7" iPhone, a new Apple TV, new 12" MacBook and MacBook Pro designs, and a 5.5" iPhone. Head over to MacRumors for the full details about each product category.

- iWatch: Kuo believes the iWatch will ship during the end of the third quarter, offering biometric functionality, integration with the iPhone, iPad, and Mac, and a "fashionable appearance." As has been previously suggested, he predicts the device will come in two sizes, with a 1.3-inch and 1.5-inch flexible AMOLED display. It will also include a sapphire cover lens, biometric recognition, an NFC chip, wireless charging, a 200 to 250 mAh battery, and a slim and light design. Kuo also believes that Apple will offer the iWatch at multiple price points, with the most expensive version costing upwards of $1,000.

- iPhone 6: Supporting previous iPhone 6 rumors, Kuo believes the device will come in two sizes: 4.7 and 5.5-inches, with resolutions of 1334x750 (326ppi) and 1920 x 1080 (401 ppi), respectively. Both models will come with an A8 processor, 1GB of RAM, LTPS display panels, optical image stabilization, and Touch ID. Kuo points to a 10 to 20 percent narrower bezel, a 6.5–7.0mm thickness, metal casings, and NFC integration. Mass shipments of the 4.7-inch version are expected in September, with the 5.5-inch version shipping later. Kuo suggests that only the 64GB 5.5-inch version will use sapphire displays. 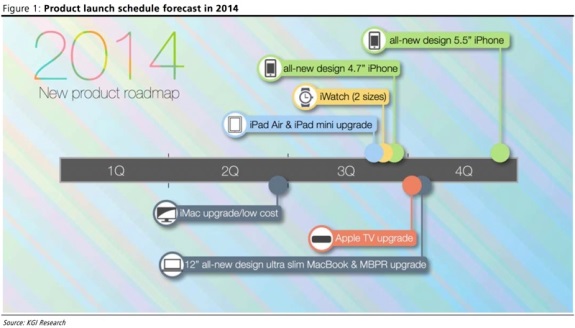