Posted on Monday, Apr 21 2014 @ 16:54 CEST by Thomas De Maesschalck
Details about ASUS' upcoming Z97-based ROG Maximus VII lineup have hit the web. The new series consists of three models: the ATX-sized Hero and Ranger and the Gene with a Micro-ATX form factor. Full details at TPU:

The Maximus VII Ranger features two PCI-Express 3.0 x16 slots wired to the CPU (x8/x8 with both populated), the third one is wired to the Z97 PCH, and is electrical x4. The board appears to feature a simple 8-phase CPU VRM, six SATA 6 Gb/s ports, an M.2 slot, SupremeFX audio, and a single gigabit Ethernet connection, probably made by Intel. Moving on, the Maximus VII Hero. Which could feature a meatier CPU VRM, eight SATA 6 Gb/s ports, one M.2, a similar expansion slot layout to the Ranger, and probably more connectivity options. The Maximus VII Gene is a feature-rich micro-ATX board, with a similar CPU VRM to the Maximus VII Hero, two PCI-Express 3.0 x16 slots, an addition PCI-Express x1, an M.2, and eight SATA 6 Gb/s ports. Its connectivity appears to include a WLAN card with 802.11 ac. 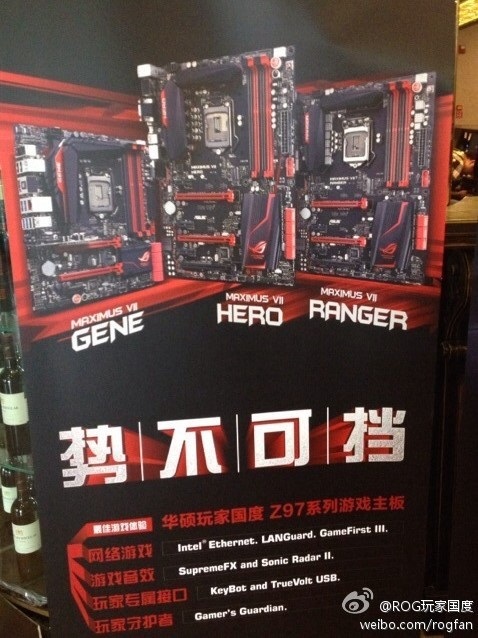