Posted on Thursday, Apr 24 2014 @ 12:24 CEST by Thomas De Maesschalck
RaiJintek announces Morpheus, a new graphics card cooler with 129 aluminium fins and twelve heatpipes. The heatsink ships without fans but can be equipped with multiple large fans. Morpheus will ship by the end of this month for 54.90EUR.

After the marvellous and heavily praised CPU coolers EreBoss, Themis or Pallas received sundry recommendations by the press, the next step of the young brand RaiJintek lies ahead. This time realised in form of a high performance cooler for graphics cards. As the product’s name - inspired by Greek mythology - already suggests, Morpheus lets the user’s dreams come true. Whisper-silent operation, twelve heat pipes and a superb compatibility - such are key features of the gargantuan model, that can easily handle the latest high-end graphics cards. Only at Caseking!

In order to keep a balance between high cooling performance and low noise emissions, the Morpheus sports a very large, fully nickel-plated heat sink along with a total of 129 aluminium fins, that can be outfitted with multiple, large fans, subsequently allowing for an effective heat dissipation capacity of up to 360 Watts. Despite the considerable length of 25.4 cm, incompatibilities with graphics cards driven by two power connectors won’t arise, since the heat sink does not protrude over the long PCBs of modern day high-end graphics cards.

An abundance of twelve nickel-plated copper heat pipes is embedded within the mirror-smooth base plate made of nickel-plated copper, which stands in direct contact with the GPU. Already at this point, the intricacies of the whole construction begin to show, because, on first glance, the VGA cooler appears to possess only six heat pipes, which traverse through the bottom and are being lead out on both sides. This commonly used construction method is consciously omitted by RaiJintek, since the usage of separate heat pipes is supposed to yield a significantly better heat dissipation result and so all of the twelve heat pipes are mounted head-to-head in six rows. The heat sink itself is consequently divided into two segments, which are still connected with each other via aluminium fins at the rims for better heat dispersion.

Also notable is the remarkable build quality of this RaiJintek product, that once again raises the bar. The whole cooler is thus covered in silver nickel coating. A true gem is the mounting system of the Morpheus cooler. It comprises two ledges, that are being fastened to the base plate and that provide several mounting screw holes for high compatibility. Eventually, a majority of the most recent high-end graphics cards from AMD and NVIDIA are being supported, including the current top models GTX 780 (Ti) and R9 290(X).

Due to the necessity of cooling other heat sources like voltage regulator modules and video memory next to the GPU chip itself as well, RaiJintek supplies its VGA cooler with a broad assortment of passive heat sinks, that are suited for a wide range of graphics card models. Contained in this set are three types of VRAM coolers, which are to be attached with twin adhesive thermal pads along with a large heat sink ledge for the VRMs of the graphics card.

Particularly easy is even the cooler’s fan mounting solution, by means of which two 120 mm silent fans can be attached to the heat sink through utilizing the mounting clips that come with the accessory set of each Morpheus SKU. The absence of any included fans allows for a maximum of freedom in the choices to be made along with the possibility of practically realising configurations between ultra-silent to high-end overclocking. Thanks to the enormous cooling power, fast spinning fan models won’t be needed in order to keep even the hottest graphics-behemoth at a low temperature. This concludes the circle of criteria required for a quiet and at the same time potent cooling solution.

The RaiJintek Morpheus, priced at 54,90 € is ready for ordering as of now at Caseking (www.caseking.de/morpheus) and will arrive in stock at the end of April. 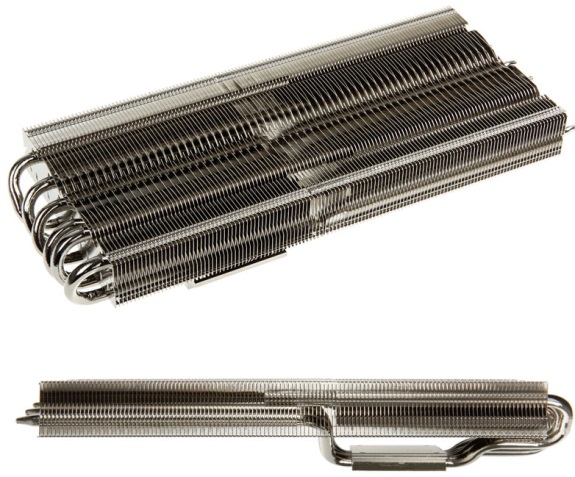