Posted on Monday, May 05 2014 @ 13:03 CEST by Thomas De Maesschalck
Details of Intel's Skylake and the accompanying 100-series chipsets were leaked by VR Zone. Soon we'll see the launch of Intel's Haswell Refresh, afterwards we can expect Broadwell and sometime in late 2015 we can expect the arrival of the Skylake processors.

The 14nm Skylake supports DDR4 and will require a 100 Series chipset, it will not be compatible with the new 9-series. There will be four variants of Skylake: the traditional LGA socket for desktops, as well as three BGA versions for laptops, ultrabooks and all-in-one PCs.

The new platform will feature better integrated graphics and will have dual-core and quad-core chips with embedded DRAM. The new standard wireless chipset is named Snowfield Peak, for WiGig there will be the Douglas Peak and Pine Peak chips and systems that require LTE can use the recently launched XMM 7260 modem. Also new is the GS2000, a navigation chip that supports the Chinese Beidou navigation satellite system.

The roadmap below also indicates that Intel has the new Alpine Ridge chip in store for Thunderbolt and the Jacksonville chip for LAN. 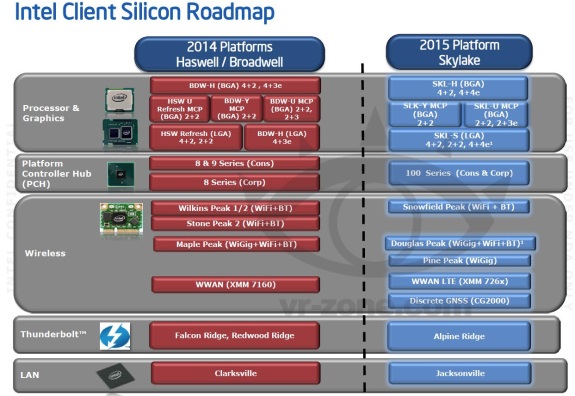