Posted on Tuesday, May 06 2014 @ 12:57 CEST by Thomas De Maesschalck
PowerCooler is about to introduce the Radeon R9 295X2 Devil13, an air-cooled variant of the R9 295X2 that is the first truly non-reference design. The card takes up two slots and features a custom-design PCB with enhanced VRM. The heatsink consists out of a number of heatpipes and two aluminium heatsinks, one for each GPU, and a base plate heatsink for the memory. Airflow is delivered by three 100mm fans.

Pictured below, the R9 295X2 Devil13 from PowerColor features a completely custom-design PCB that is said to feature a meatier VRM than the one you get on reference design boards; which draws power from 4 (that's right, four) 8-pin PCIe power connectors. The PCB appears taller but just as long as the reference one, and features a back-plate that doubles up as structural reinforcement. The cooler is an interesting piece of engineering. It appears to feature two independent aluminium fin heatsinks, each over one of the two GPUs, and a base-plate heatsink to cool the memory, VRM, and bridge chip. The contraption is then ventilated by three 100 mm fans that appear to feature lateral+axial hybrid air-flow blades, on their impellers. PowerColor could launch the R9 295X2 Devil13 at Computex 2014, if not sooner. 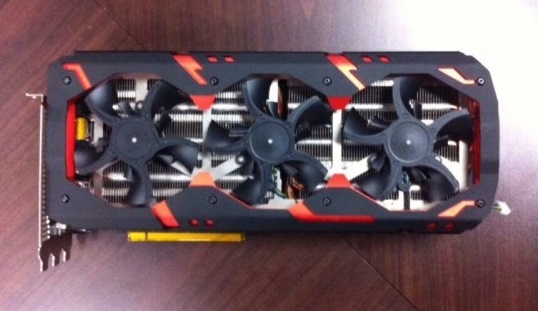