ARM hints at $20 smartphones in next few months

Chip designer ARM predicts we'll see the first $20 Android smartphones in the next couple of months. Such a device will obviously be limited in terms of specifications, it will feature a single-core Cortex-A5 processor and probably 2.5G/EDGE connectivity.

But even with such modest specs, demand for such devices is likely to be massive, especially in developing markets. While around 500 million entry-level smartphones/tablets (costing $150 or less) were shipped last year, figures jointly compiled by ARM and industry analysts Gartner estimate that that figure will double to a billion by 2018.

ARM says that “advanced mobile computers are becoming affordable to all”, but adds that handsets are unlikely to be priced much below $20 for the foreseeable future due to ‘manufacturing limits’. 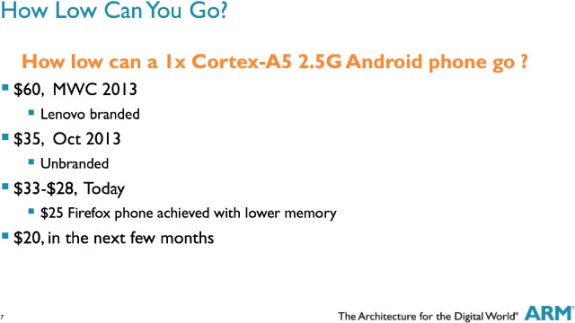