Intel Devil's Canyon to do 5GHz on air cooling?

Intel just released its Haswell Refresh but you'll have to wait a bit longer for the Core i7-4790K and the Core i5-4690K, two new parts designed specifically for overclocking enthusiasts.

These two processors are codenamed Devil's Canyon and they differ in several ways from the regular Core processors. These chips are made from high-performing dies binned out from the foundry, they are placed on extra-durable packages with contact points designed to handle higher voltages and they also feature a superior thermal interface material between the die and the integrated heatspreader (IHS).

Both processors are expected to be introduced at Computex 2014 with availability slated for around mid-June. Devil's Canyon may be quite an exciting chip for overclockers, if the rumors are right they may be capable of running at 5GHz on air cooling. 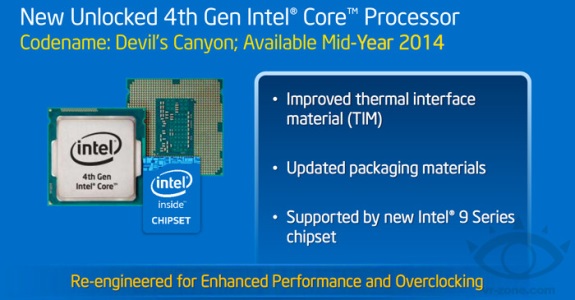