GIGABYTE TECHNOLOGY Co. Ltd., a leading manufacturer of motherboards and graphics cards launched earlier this month their new 9 series motherboards based on the Intel® Z97/H97 chipsets with support for 4th and 5th generation Intel® Core™ processors. Out of this new series, GIGABYTE is now proud to present the Super Overclocking (SOC) models with the Z97X-SOC Force and Z97X-SOC motherboards.

“With the 9 series overclocking boards, we tried to innovate in ways that let the users intuitively get the maximum performance out of their hardware,” commented Hicookie, Chief Overclocking Evangelist, GIGABYTE Motherboard Business Unit. “I can’t wait for the overclocking community to start benching these boards and see what other records can be broken.”

Breaking New World Records
Already set to be a leader, GIGABYTE 9 series overclocking motherboards have made a clear statement that they are the weapon of choice when it comes to performance. With a benching session in the GIGABYTE OC Lab shortly before launch, HiCookie, Dinos22, Sofos1990, SniperOZ, YoungPro, Vivi and Steponz have managed to set the overclocking bar high by taking out a total of 9 World Records with the new Z97X-SOC Force.

OC Touch
GIGABYTE OC Touch includes a range of hardware overclocking buttons directly on the motherboard, making overclocking on the fly extremely fast and easy. The design philosophy behind OC Touch is simple; to help enthusiasts and overclockers not only get the most performance from their hardware, but also the absolute most enjoyable OC experience.

OC Ignition
OC Ignition maintains power to the motherboard and connected components while the system is shut down. This means that system fans will continue to provide airflow in cold bug situations, while i-ram drive users will not lose installed data. OC Ignition also allows users to pre-test water cooling setups, and allows case mod demonstrations without having to turn on the PC.

OC DIMM and OC PCIe Switch
Manually turn on or off each channel of installed memory DIMMs, allowing users to effortlessly disable memory DIMMs from the system without the hassle of physically removing. Overclockers can manually turn on or off each installed PCIe lane of the motherboard, allowing users to disable individual graphics cards without physically removing. This is especially useful when overclocking on LN2 and water cooled systems.

OC Brace
OC Brace allows extreme overclockers and system testers to safely install up to four graphics cards in an open case or test bed without risking PCIe slot damage or preventing cards not showing up in the OS due to poor contact with PCIe slot. OC Brace is a simple and elegant way to give robust installation support to full sized graphics cards in extreme multi-GPU configurations.

OC Connect
http://www.gigabyte.com/fileupload/features/2/overview/3261.jpgOC Connect positions two USB connectors on the near side of the motherboard facing the overclocker. This makes it easier to save data, flash the BIOS or install software in open bench testing platforms whether for extreme overclocking or simply pretesting the PC before final component installation inside a case scenarios where accessing the rear panel I/O can be an inconvenience.

Build-in Rear Audio Amplifier
Also onboard is a high-capacity amplifier which is able to drive 600? loads, giving audiophiles a fuller range of dynamic sound with crisper details and less distortion when using high quality professional headphones.

All IR® Digital CPU Power Design
GIGABYTE 9 series overclocking motherboards use an all-digital CPU power design from International Rectifier® which include both digital PWM Controller and industry-leading PowIRstage™ controllers. These 100% digital controllers offer incredible precision in delivering power to the motherboard’s most power-hungry and energy-sensitive components, allowing enthusiasts to get the absolute maximum performance from their next generation Intel® Core™ processors.

10K Durable Black™ Soild Caps
GIGABYTE 9 series overclocking motherboards integrate the absolute best quality solid state capacitors that are rated to perform at maximum efficiency for a guaranteed minimum of 10K hours. Not only do they provide ultra-low ESR no matter how high the CPU loading, they also come in customized jet black from Nippon Chemi-Con and Nichicon.

(15?) Gold Plated CPU Socket Design
GIGABYTE OC motherboards come equipped with a gold plated CPU socket, which means that enthusiasts can enjoy absolute reliability and longevity for the CPU socket overtime, without having any concerns about corroded pins and bad contacts.

GIGABYTE UEFI DualBIOS™ with Dashboard Mode
GIGABYTE's UEFI DualBIOS™ has a redesigned user interface that offers users the chance to take control of their BIOS environment like never before.
• Take control of how your BIOS looks and feels with a fully customizable UI
• Adjust overclocking and performance settings in real-time
• Smooth mouse control and shortcuts for fast navigation< 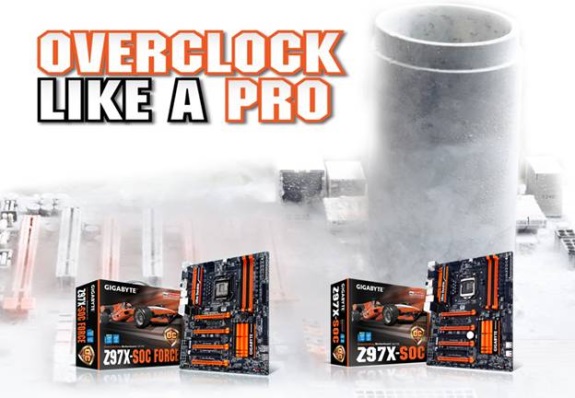