Posted on Tuesday, May 13 2014 @ 13:52 CEST by Thomas De Maesschalck
ASRock announces that its Z97 Extreme6 motherboard features an Ultra M.2 PCIe Gen3 x4 socket with a bandwidth of 32Gbps. The performance boost is achieved by wiring the M.2 interface directly to the CPU instead of going through the onboard chipset first. The only downside is that to achieve this ASRock broke the lanes down into x8/x4/x4 instead of x8/x8 but that shouldn't be a problem for most users.

As motherboard manufacturers unveiled their new Intel® 9 Series products one after another, we can see the proliferation of PCIe Gen2 x2 M.2 interface on Desktop motherboards very clearly. However, ASRock Inc. took the lead among other competitors once again. This time it's the Z97 Extreme6 which boasts "Ultra M.2 PCIe Gen3 x4" socket stands out. With its doubled transfer bandwidth, ASRock Ultra M.2 is able to completely break through the speed limit of SATA3 6Gb/s and blow others away!

The Secret of Ultra M.2
Ultra M.2 is one of ASRock creative innovations. Compared to normal M.2 with PCIe Gen2 x2 bandwidth, ASRock is the first one in the world to double the M.2 bandwidth to PCIe Gen3 x4! Furthermore, the layout of Ultra M.2 is also specially designed. On a regular motherboard design, the signal route starts from the M.2 device, goes through the onboard chipset, and finally reaches CPU. In contrast, by connecting the M.2 interface to CPU directly, ASRock Ultra M.2 has lower latency and pushes the I/O speed to a new level!

Designed For Tech Enthusiasts – Z97 Extreme6
As we may conclude now, ASRock Ultra M.2 is the key component to break the I/O performance barrier on current Desktop PC. With the proliferation of Ultra M.2 and M.2, the new era of I/O speed is about to come. If you are tired of the HDD performance bottleneck and looking for an ultimate I/O solution for your Desktop, ASRock Z97 Extreme6 is the only motherboard packs the world's fastest Ultra M.2 socket, ASRock Super Alloy technology, 12 Phase Power Design, Purity Sound™ 2, Dual LAN, SATA Express interface, ASRock Cloud and other unique features. It is definitely the best motherboard for you! 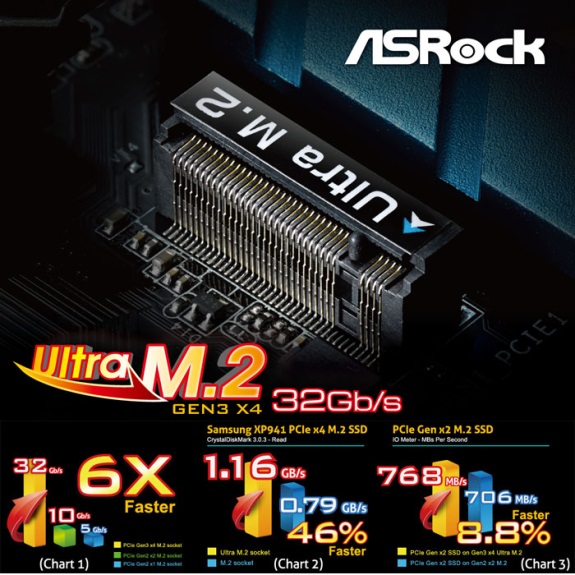