Corsair®, a worldwide designer of high-perform­­­­­­ance components to the PC hardware market, today announced the release of the Force Series® LX solid-state drives (SSD). Available in either 256GB or 128GB capacities, Force Series LX SSDs bring the amazing performance benefits of an SSD to new lower price point – making it easier than ever to move your PC into the SSD fast lane.

The speedy benefits of solid-state drives have long attracted PC enthusiasts, but high prices may have put off some users from making the switch to this faster storage technology. In response to this dilemma, Corsair is bringing all the perks of an SSD to a new, even more budget-friendly price point so everyone can feel the rush. With the Force LX 256GB costing $129.99 and the 128GB just $74.99, there’s never been a better time to upgrade to faster SSD technology.

A slim-line 7mm aluminum housing makes it easy to install the Force LX into almost every desktop or notebook PC with a 2.5 inch drive bay -- an ideal upgrade to breathe new life into an notebook, ultrabook or PC in need of a boost. Corsair’s bundled SSD Toolbox software utility is also included as a free download, allowing you to easily optimize your SSD’s performance, clone your existing hard drive, or securely erase all data on a drive. TRIM, NCQ and S.M.A.R.T. technologies automatically maintain drive performance for years to come, and Corsair tops off the package with a 3 year warranty and legendary customer service for total peace of mind.

Pricing, Availability, and Warranty
The Force Series LX SSDs are available in 128GB and 256GB capacities at MSRPs of $74.99 and $129.99. The SSDs are available immediately from Corsair's worldwide network of authorized retailers and are backed with a three year warranty and Corsair customer service and technical support. 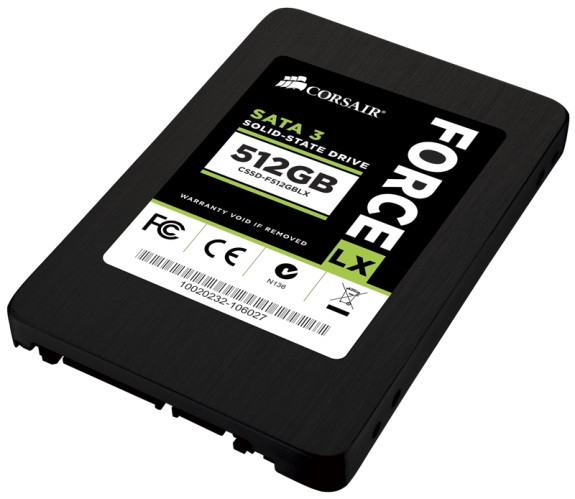