MSI, world leader in graphics card technology Is pleased to announce the availability of the GTX 780 GAMING 6G. Featuring everything you’d expect from an MSI graphics card, but now with doubled-up memory for higher performance at 4K resolutions. With the already spectacular performance of the GTX 780 and the introduction of new games and high resolution monitors comes the demand for more video memory. Combined with the award winning Twin Frozr IV Advanced thermal design, MSI exclusive Gaming App and the all new Afterburner 3.0 the GTX 780 GAMING 6G is an easy step-up into the world of 64-bit 4K resolution gaming, the way it’s meant to be played™.

MSI's GAMING series is designed to provide gamers with quality they can rely on. For Graphics Cards this means you get the best thermal solution and components to make sure you stay cool and stable no matter how long your gaming session is. The Twin Frozr IV Advanced is remarkably silent while maintaining excellent temperatures while the Military Class 4 components are designed to remain stable in extreme conditions. The MSI Gaming App puts the gamer in control with a choice of Silent, Gaming and OC modes to utilize performance or silence based on the need of the gamer. MSI Afterburner 3.0

MSI has just released Afterburner 3.0 which is the world's first 64-bit overclocking software for Graphics Cards, Integrated Graphics and Notebooks. MSI Afterburner 3.0 can display all statistical information in 32 and 64 bit games and applications, comes with a multitiude of configuration options, like exclusive Triple Over-voltage, built in video capturing and DirectX 11 benchmark.

Watch_Dogs puts players in the shoes of Aiden Pearce, a man on a mission with the ability to hack anything and everything in a fully-realized, near-future Chicago. With a multitude of gameplay possibilities, an engrossing storyline, endless open world options, and next-gen graphics, Watch_Dogs became a hotly tipped title the second it was unveiled at E3 2012. Get Watch_Dogs now for free at selected retailers with your purchase of the MSI GTX 780 GAMING 6G 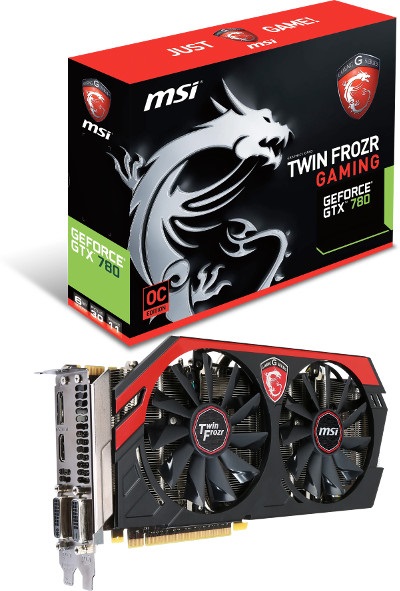