MSI, innovator in graphics cards, is pleased to announce the availability of the NVIDIA GeForce GTX TITAN Z utilizing the world’s most powerful GPU. With two Kepler GPUs and 12GB of dedicated frame buffer memory, GTX TITAN Z is engineered for next-generation 5K and multi-monitor gaming. With two GK110 chips, GTX TITAN Z is powered by a total of 5,760 processing cores. GTX TITAN Z gives you truly amazing performance—easily making it the fastest graphics card we’ve ever made. NVIDIA GPU Boost 2.0 technology allows the core clock to be automatically adjusted on the fly for optimal in-game performance. When used with the MSI Afterburner overclocking utility, the power limit and clock offset can be adjusted as well for better overclocking capability. A single card can also support NVIDIA 3DVision Surround technology for up to four monitors to give gamers the best viewing experience. The MSI GeForce GTX TITAN Z is the best choice for serious gamers.

The MSI GeForce GTX TITAN Z graphics card supports NVIDIA's GPU Boost 2.0 technology that allows the core clock to be adjusted on the fly for optimal performance. Through QUAD-SLI technology, the performance of multiple graphics cards can definitely satisfy the demands of any hard-core gamer.

MSI has just released Afterburner 3.0 which is the world's first 64-bit overclocking software for Graphics Cards, Integrated Graphics and Notebooks. MSI Afterburner 3.0 can display all statistical information in 32 and 64 bit games and applications, comes with a multitiude of configuration options, like exclusive Triple Over-voltage, built in video capturing and DirectX 11 benchmark. 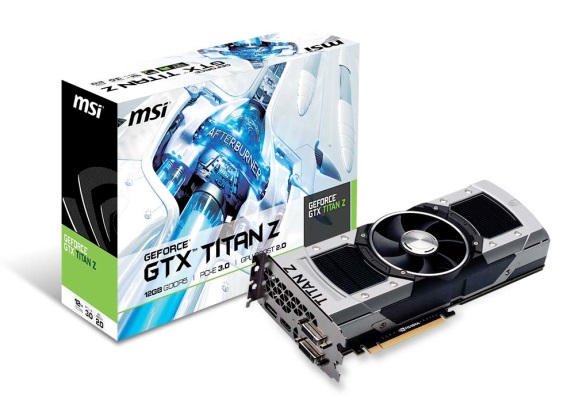