Posted on Monday, Jun 02 2014 @ 14:13 CEST by Thomas De Maesschalck
The latest operating system marketshare data from NetMarketShare reveals the use of Windows XP fell 1.02 percent from 26.29 percent in April to 25.27 percent in May as the operating system hit the end of its lifecycle.

One interesting observation is that XP's demise pushed Windows 7's marketshare from 49.27 percent in April to 50.06 percent in May. The 0.79 percent increase in marketshare is nearly double that of the growth achieved by Windows 8.x and it also marks the first time that Windows 7's use tops the 50 percent mark.

The combined marketshare of Windows 8 and Windows 8.1 stood at 12.64 percent, an increase of 0.4 percent. Despite the fact that Windows 8.1 is a free update it's quite remarkable that just under half of Windows 8.x users still use Windows 8. 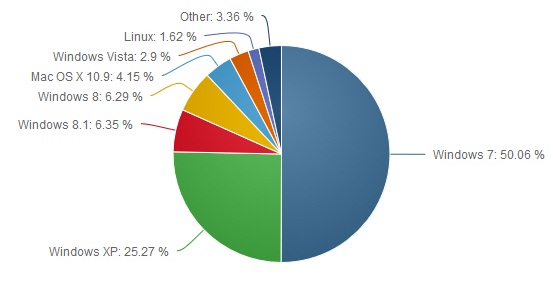