Intel also talked about its processor roadmap at the 3D Revolution 2014 event in Rome. The company published a new desktop CPU roadmap that reveals the chip giant's plans for the coming year.

The Haswell Refresh just hit the market and in Q4 2014 we'll see the launch of the Core i7 "Haswell-E" series. The latter chips feature the new LGA2011-3 package and will require a motherboard with the new X99 chipset. Haswell-E will introduce DDR4 memory to the consumer platform and will reign until late Q3 2015 when Intel plans to launch the 14nm Broadwell-E, which promises to be supported by the same X99 platform.

Broadwell is now expected to make a debut in Q1 2015, these processors should be supported by existing LGA1150 motherboards after a BIOS update. Broadwell will have a very short shelf life though, the roadmap reveals Skylake is anticipated to hit the market just six months after Broadwell's launch. Unfortunately, while there will be some unlocked K-series Broadwell processors in Q1 2015, it seems overclockers will have to wait until 2016 for unlocked Skylake processors. Skylake will require a new motherboard as it introduces the LGA1151 socket.

The roadmap also reveals Intel's plan to launch Broadwell BGA chips a couple of months from now, followed by Skylake BGA processors in mid-2015. These are sub-25W models designed for ultra-low power desktops. The entry-level J-series will see the scrapping of the Atom brand, with Celeron and Pentium "BayTrail-D" extending to late December 2014 before being replaced by Braswell-D in early 2015. 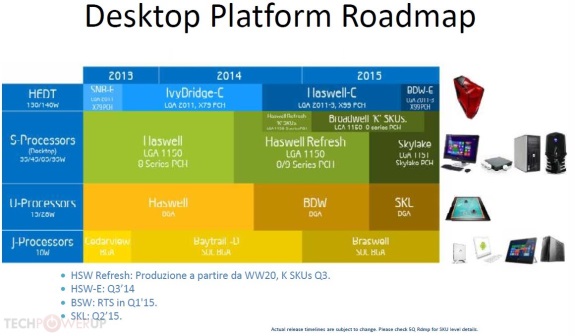