Noctua Active Noise Cancellation Project may be ready within a year

Posted on Thursday, Jun 12 2014 @ 12:34 CEST by Thomas De Maesschalck
Noctua showed off the progress on its active noise cancellation (ANC) technology at Computex. The company has been working on the technology for over two years, it promises to achieve a broadband sound signature that sounds more agreeable to the human ear. According to previous press statements from Noctua, you can expect 80 percent higher airflow and an 120 percent increase in static pressure at the same noise level as the original NF-F12 fan.

Originally expected to become available in the latter half of 2013, Noctua now claims the first products could be ready in Q2 or Q3 2015.

Last but not least, Noctua has given a progress report regarding its Active Noise Cancellation Project with RotoSub. During the last year, the technology has progressed from rapid prototyping and hand-made samples to manufacturing test-runs that allow to produce a larger sample base for extended long-term testing. While long-term tests for aspects such as vibration, bearing life and the ANC function itself are underway, Noctua is finalising software and product designs for air- and watercooling applications. Based on current estimations, first products could be ready in Q2/Q3 2015. 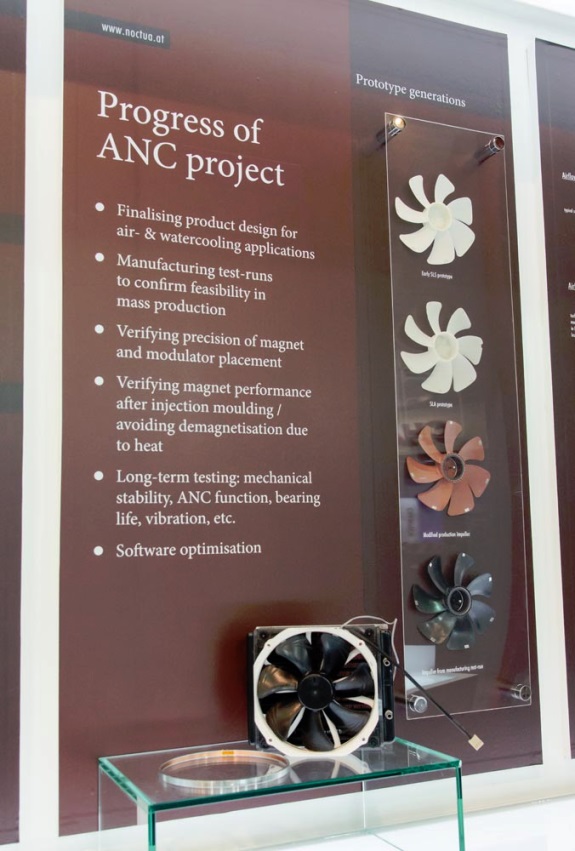