Posted on Monday, June 23 2014 @ 11:40 CEST by Thomas De Maesschalck
X-bit Labs informs us that AMD is preparing to launch a new FX-series processor that will come bundled with watercooling. This will be AMD's response to Intel's Devil's Canyon, not a lot of details are available but it's speculated that this chip may have a stock clockspeed of 5GHz or higher.

Roy Taylor, vice president of global channel sales at AMD, on Friday published a teaser on his Twitter. The post contains a picture of an FX processor packaging, which is vastly different from packages that AMD currently uses for its FX product line. The label on the box says that it contains an “FX-series processor with liquid cooling technology.” The teaser is entitled with the phrase “something new is coming.”

Since AMD calls the new product a “processor”, the chip is clearly not an accelerated processing unit (APU) and therefore is a “classic” central processing unit (CPU) with no integrated graphics engine. A source close to AMD confirmed that the new FX chip for desktops is indeed a new multi-core CPU aimed at high-end desktops. The new FX microprocessor is fully unlocked and comes with a closed-loop liquid-cooling solution, which means that it is aimed at enthusiasts and overclockers. 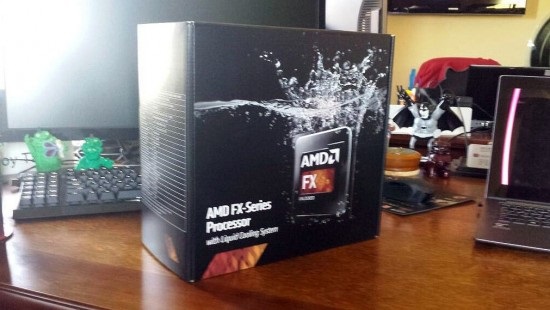