Posted on Tuesday, Jun 24 2014 @ 17:05 CEST by Thomas De Maesschalck
Shuttle announced that its new line of fanless PCs now comes with an Intel Celeron instead of an Intel Atom processor:

Shuttle Computer Handels GmbH, the European subsidiary of Shuttle Inc., one of the leading developers and manufacturers of compact PC solutions such as the world-renowned XPC Mini-PC Barebones, today announces delivery of the fourth generation of its fanless XS35 and XS36 models. With this step Shuttle completes the changeover from Intel Atom to Intel Celeron processors across its product range.

The new models, the XS35V4 and XS36V4, are fitted with an Intel Celeron J1900 processor in 22 nm architecture. Its four CPU cores with 2 GHz and 2 MB cache promise an increase in working speed in this product category. Instead of the previous 4 GB, now a total of 8 GB DDR3-SO-DIMM is supported.

A particular feature of both models is the range of monitor connectors with HDMI, DisplayPort and VGA all being available. Two connectors can be activated simultaneously and used for dual monitoring. The Intel HD Graphics integrated in the processor enables smooth playback of hi-res video material in full HD quality.

"Since the first XS35 was presented to the public in 2010, fanless PCs in space-saving formats have become an established part of our product range," says Tom Seiffert, Head of Marketing & PR at Shuttle Computer Handels GmbH. "Thanks to constantly shrinking dimensions, it has been possible over the years to accommodate ever more computing power in the same format - and with reduced energy consumption."

By contrast, only a single 2.5" drive fits in the XS36V4, but it does offer two serial interfaces (RS-232) on the front. Both models consume only about 8 W when switched on.

The recommended retail price for the Shuttle XS35V4 and XS36V4 is Euro 165 (ex Vat). Both machines described in this press release are now available from retailers Europe-wide. 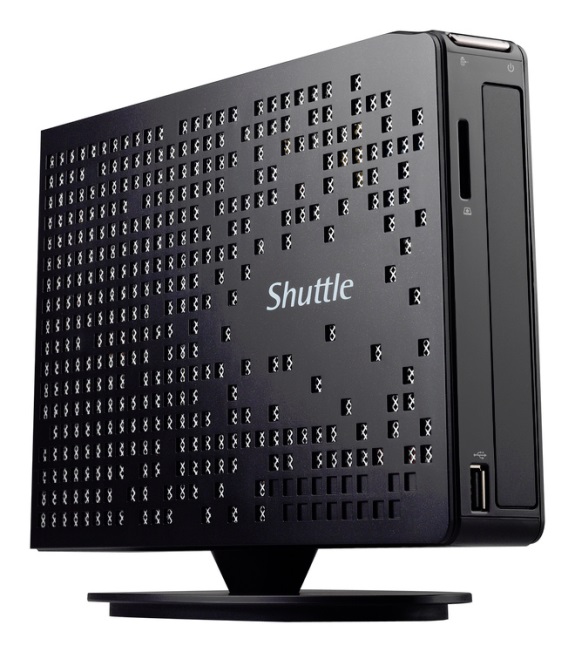