Posted on Tuesday, Jul 01 2014 @ 12:31 CEST by Thomas De Maesschalck
Asetek announced it has been granted a patent for a liquid cooling system for graphics cards.

The summary of the patent reads as follows:

The patent seems pretty broad so we're afraid that Asetek will try to use it to drive competitors out of the market.

“As seen in the recently announced AMD Radeon R9 295X2, the graphics cooling market is one that we see as having tremendous growth potential for our desktop business,” said André Sloth Eriksen, Founder and CEO of Asetek. “We continue to see increasing interest from GPU and graphics card manufacturers due to increased power use and demands for lower acoustics. Given this interest, it is possible that the GPU cooling business could rival our CPU cooling business in the coming years.”

Asetek has been developing liquid cooling solutions for graphics cards for more than 10 years using their patented sealed all-in-one liquid cooling technology. Factory filled and sealed for maximum reliability and ease-of-use, Asetek’s liquid coolers have been thoroughly tested and certified to operate without maintenance for over 50,000 hours. 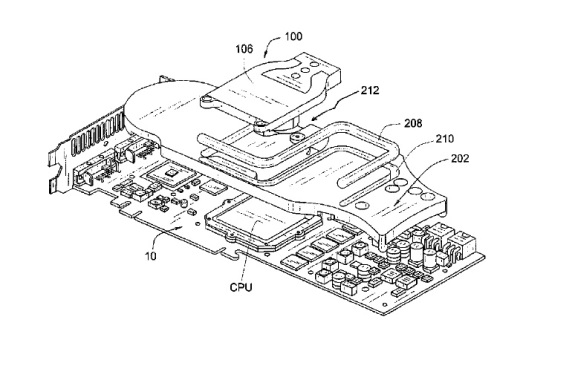