FUD Zilla heard rumors that Intel's Skylake-S desktop processor will likely be introduced at Computex 2015 or sometime in June 2015. Skylake-S will require a new motherboard with the LGA1151 socket and one of the curious things about it is that it will support both DDR4 1.2V and DDR3L 1.35V memory. Which type of memory is used will be up to the motherboard manufacturers to decide.

The chipset that will let you overclock Skylake-S is called Z170 and it comes with 1 x 16 plus 2x8 or 1x8 plus 2x4 PCIe express 3.0 combination. SLI and Crossfire will continue to live in 2015 and beyond, there is no doubt about it. The Z170 board supports two memory channels with two modules each. In case you want to use integrated graphics, you can get three independent display outs for three monitors. The board supports Intel Rapid Storage Technology 14, Intel Smart Response Technology and has support for 14 USB ports, 10 of which can be USB 3.0. Intel is not implementing USB 3.1 and that would be a cool thing. We expect to see USB 3.1 shipping in 2015, but motherboard manufacturers will have to rely on external controllers.

Z170 boards will come with six SATA 6Gbps ports and a maximum of 20 lanes for PCI express capable ports. When it comes to storage, the Z170 boards support a maximum of three SATA Express ports X2 and three RST for PCIe Storage Ports (x4 M.2 or x2 SATA Express). 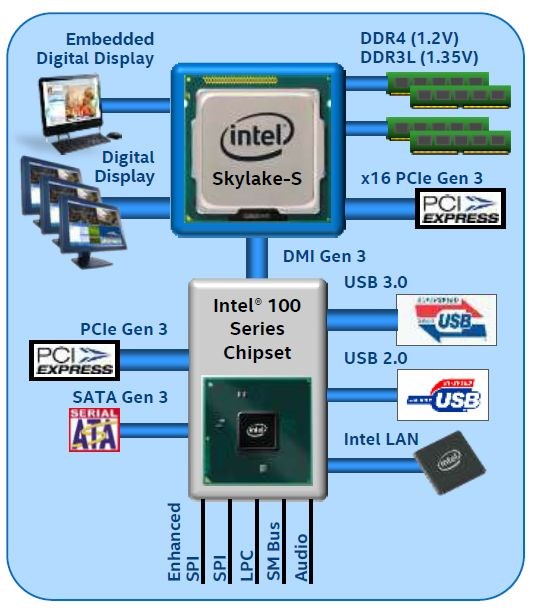