Strikingly white, irresistibly tough and exclusively rare
Sabertooth Z97 Mark S made its first appearance at Computex 2014, where it was exhibited as a concept board bearing the codename ‘Sabranco’ — a portmanteau of saber and ‘branco’, the Portuguese word for ‘white’.

Responding to the hugely-positive visitor feedback, our engineers refined the design to produce the Sabertooth Z97 Mark S, the very first all-white motherboard in the ASUS TUF series with an extra-special dimension that we know enthusiast PC-builders will love. Innovative printing technology means that Sabertooth Z97 Mark S retains its strikingly-white hue for its lifetime, without discoloring.

Adding to the aesthetic appeal are two traditional Chinese characters adorning the rear side of Sabertooth Z97 Mark S. Carrying the meaning ‘tiger spirit’, they signify that Sabertooth Z97 Mark S is made with unwavering endurance to survive the most extreme conditions.

Sabertooth Z97 Mark S also has exclusive limited-edition rarity, and every single board will be individually numbered.

The motherboard that keeps as cool as it looks
Sabertooth Z97 Mark S is equipped to keep as cool as its strikingly-white looks. TUF’s Thermal Armor with Flow Valve technology is an exclusive arctic-camouflage-style cover with dual fans to boost airflow across the system for maximum heat dissipation. The new board comes with TUF’s easy-to-use Thermal Radar 2 software to make quick work of fan tuning for complete system cooling, enabling users to enjoy the perfect balance between quietness, cooling and performance.

TUF by name, tough by nature
Sabertooth Z97 Mark S offers great strength and cooling, with exclusive TUF Fortifier technology. This reinforced backplate ensures that the motherboard doesn't buckle under the weight of heavy graphics cards and CPU coolers, minimizing the risk of damaged circuitry from bowing and bending. TUF Fortifier also includes a thermal pad that efficiently directs heat away from the back of the 8+2-phase Digi+ voltage-regulator module (VRM) and other critical components — an innovation that reduces operating temperatures by up to 7°C. 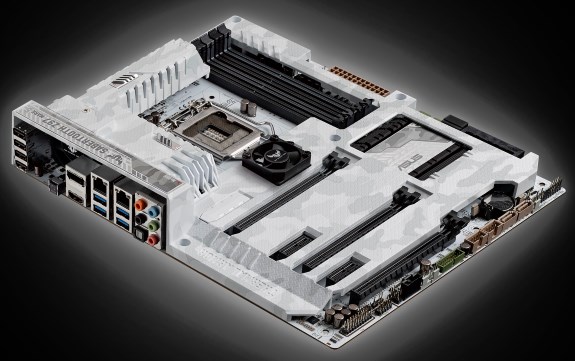