Intel Corporation today announced a number of technology advancements and initiatives aimed at accelerating computing into the next dimension. The announcements include the Intel® Curie™ module, a button-sized hardware product for wearable solutions; new applications for Intel® RealSense™ cameras spanning robots, flying multi-copter drones and 3-D immersive experiences; and a broad, new Diversity in Technology initiative, which includes a $300 million investment to encourage more diversity at Intel and within the technology industry at large.

"The rise of new personal computing experiences, intelligent and connected devices, and the wearable revolution are redefining the relationship between consumers and technology," said Brian Krzanich, Intel CEO. "Our goal with Intel technology is to help solve real problems and enable experiences that are truly desired by people and businesses. In order to do this, we must also do more to lead the growth of diversity and inclusion within the technology industry. Women and under-represented minorities will continue to play a greater role as consumers, influencers, creators and leaders."

Krzanich made the announcements during a keynote address at the 2015 International Consumer Electronics Show. He also unveiled a wearable device collaboration with Oakley*, a leading product design and sport performance eyewear brand, a 3-D collaboration with HP*, and highlighted True Key™, a new cross-platform application by Intel Security that uses personal factors like the face, device or fingerprint to make logging in easier and safer.

The Wearable Revolution
The growth of wearable technology is creating a new playing field for innovation. Krzanich disclosed plans for the Intel Curie module1, a tiny hardware product based on the company's first purpose-built system-on-chip (SoC) for wearable devices. The module is scheduled to ship in the second half of this year and includes the Intel® Quark™ SE SoC, Bluetooth low-energy radio, sensors and battery charging.

Building on this work, Intel and Oakley today announced a strategic wearables collaboration. Oakley is the first Luxottica Group brand that Intel is working with to fuse premium, luxury and sports eyewear with smart technology. Krzanich was joined on stage by Colin Baden, CEO of Oakley, who said the companies are working on an intelligent product, available later this year, designed to enhance athletes' performance. 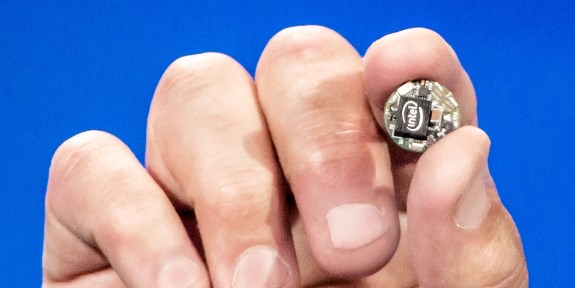