Posted on Thursday, January 08 2015 @ 18:42 CET by Thomas De Maesschalck
According to Android Central, the most desirable wearable device shown off at CES 2015 is the smartwatch co-designed by LG and car maker Audi. The watch still has no official name and surprisingly it isn't running Android Wear but a version of LG's Open webOS. The device is made from stainless steel and sapphire crystal, has a leather strap and is water resistant. Pricing and availability is unknown.

And based on what we're seeing in this prototype, LG looks set to implement more standalone app functionality in its webOS wearables. Pressing the center button brings up a list of apps, with icons styled after LG's smartphone UI. There's a dialer, messages app, music, calendar, email and "LG Health W."

On top of that there's an Audi app that allows you to control various parts of a paired vehicle, including unlocking over NFC. Other apps from LG's stable include Voice Memo, Q Voice and Remote Shutter and Find My Phone; there are also some Korean carrier apps bundled on the device. The presence of a "Sounds" settings menu also suggests it might have a loudspeaker, unlike current Android Wear watches. So while there's clearly smartphone connectivity involved, LG's wearable implementation of webOS can function as a standalone cellular device as well. 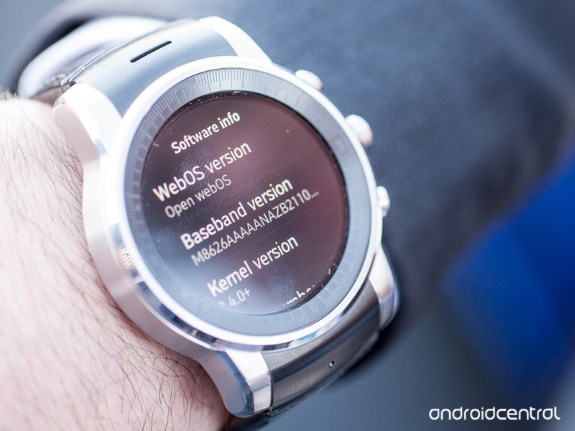