Posted on Friday, January 09 2015 @ 19:57 CET by Thomas De Maesschalck
Mad Catz makes some of the most unique gaming mice in the world and the company's latest product is no exception to the rule. The Rat ProX takes modularity up one notch by providing a modular bay that lets you swap sensors to suit your preferences. Mad Catz claims you can switch between sensors in mere seconds and promises to offer new, upgraded sensors down the road.

For most people January can be a cold, depressing month. Short days, cold nights, no more gifts to open and mince pies long since eaten.

For Mad Catz and tech fans alike however, January is a chance to celebrate all over again as its home to ‘CES’, the worlds’ largest consumer electronics show where all manner of cool new gear is introduced for the very first time.

Mad Catz are at CES this year in a major way! We’re unveiling new product which will make your jaw drop and right here, right now, the spotlight belongs to the astonishing R.A.T. PROX!

What more is there to say about the Mad Catz R.A.T. that hasn’t already been said? The original award winning R.A.T. changed gaming mice forever when we unveiled it at CES five years ago to this day, and now the mouse that has been often imitated but never bettered is back and you better believe it’s here to blow the competition away!

A result of years of painstaking planning and testing combine with engineering elegance and the result is the R.A.T. PROX, a mouse crammed full of innovations and patent pending features.

Conceived to be the most advanced gaming mouse in the world, the R.A.T. PROX is designed to offer a futureproof platform which will grow with you, the gamer. It’s the first mouse in the world to feature Modular Sensor Units (MSU) which allow you to swap out the sensor of the mouse to fit your individual gaming preferences! Think about it: Prefer a laser sensor for accuracy? No problem? Playing a game where an optical sensor just ‘feels’ better? Go ahead! Just swap out the sensor and in literally seconds, you’re good to go. When you buy your new R.A.T. PROX, you can choose the sensor which is right for you and as new sensors become available, you’ll be able to upgrade as you go! GENIUS!

But that’s just the start of a very long list of innovations which will genuinely improve the way you play. We’ve literally reinvented the wheel and the R.A.T. PROX features a brand new Scroll Wheel system allowing you to adjust the click force of the wheel, swap out the wheel itself (Three different scroll wheels are included) and even utilize a new ‘analogue strafe’ feature. Previously the horizontal ‘left and right’ movement of the scroll wheel was limited in use thanks to the movement being digital in nature. On the R.A.T. PROX, we’ve introduced analog control to the movement itself. Imagine playing an FPS and being able to delicately peak out from cover. Imagine a space flight sim where you can control your craft with perfect analog precision, the possibilities are endless and you’ll only find the feature on the R.A.T. PROX!

There’s so so much more as well. From the unique magnesium alloy construction which reduces weight and enhances strength to the completely redesigned palm rest system which allows you to swap out new palm rests easier than ever before, it really is a whole new ball game! 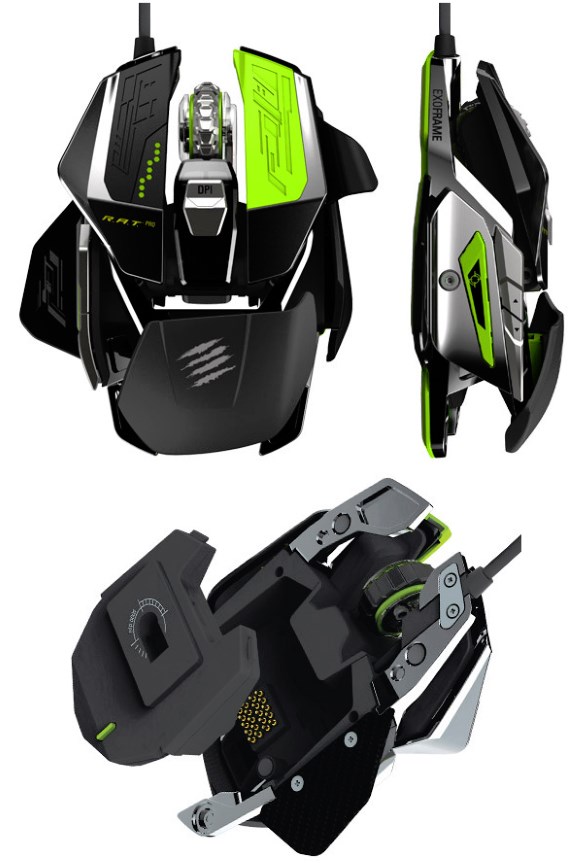