Posted on Monday, Jan 12 2015 @ 20:10 CET by Thomas De Maesschalck
One of the other cooling concepts Cooler Master had on display at CES last week is something the company will be calling "3D vapor chambers".

This is basically a new type of tower heatsink that features vertical vapor chambers that are an integral part of the CPU block, whereas previous designs where connected to the CPU block with solder. The prototype has four vertical chambers sprouting from its copper base, Cooler Master says tower-style coolers that use this concept will ship later this year and promises they'll be competitively priced.

The prototype has four vertical chambers sprouting from its copper base. The rest of the assembly includes a collection of heatpipes, but Cooler Master told us the final version will rely solely on vapor chambers to transfer heat between the CPU block and radiator fins. 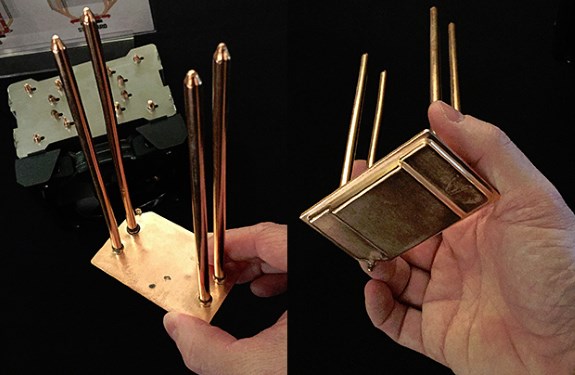