Posted on Wednesday, January 21 2015 @ 17:25 CET by Thomas De Maesschalck
Online backup service Backblaze has issues its latest report on hard drive failure rates. The company's figures are based on a sample of over 25,000 hard disk drives and the latest report shows a very worrying trend.

The chart below reveals 3TB HDDs seem to be suffering from significantly lower reliability than other capacities. Especially in the case of Seagate something seems seriously wrong as Backblaze claims Seagate's 3TB HDDs had an annual failure rate of over 40 percent in 2014!

The culprit seems to be the Barracuda 7200.14 3TB which is failing at alarming rates over at Backblaze's datacenter. This doesn't mean all Seagate HDDs are bad though, the newer Desktop HDD.15 4TB had a failure rate of only 2.5 percent across a sample of 12,000 units.

The vast majority of the 3TB Seagate failures are tied to a single model: the Barracuda 7200.14. That drive's annual failure rate jumped from under 10% at the end of 2013 to over 40% a year later. There's no indication of why those 'cudas are failing at a dramatically higher rate, but the sample size is pretty big. Backblaze has over 1,100 examples with an average age of 2.2 years.

Although the 3TB contenders from HGST and WD also suffered higher failure rates over the past year, the overall percentages are much lower—especially for HGST. Drives from that manufacturer, which is owned by Western Digital, continue to be the most reliable in Backblaze's storage pods. 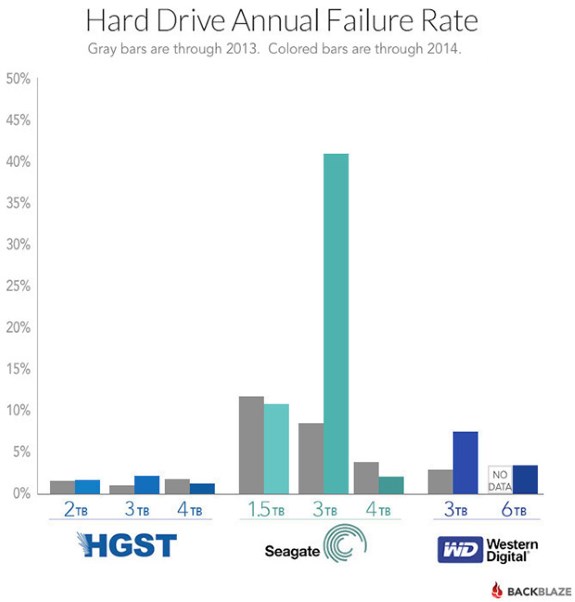