Power up and go Super Overclock
The performance-driven GIGABYTE GTX 960 G1 Gaming graphics card is forged with only the top-notch GPU core through the very own GPU Gauntlet Sorting technology that guarantees greater overclocking capabilities in terms of excellent power switching and thermal efficiency.

The GTX 960 G1 Gaming also adds the new silent semi-passive fan profile to the system, as the fans remain off when the GPU is under a set loading or temperature for low power gaming. Gamers could enjoy an absolutely silent gaming experience when playing light MOBA (multiplayer online battle arena) games like League of Legends®[1].

Even when running the most demanding content, the G1 Gaming graphics card keeps the acoustics well in check under 20dB, ensuring noise does not get in the way. A pair of LED fan indicators on the side of the card provides an instant display of the fan status.

Suit the ways you game
With the introduction of the GTX 960 G1 Gaming, GIGABYTE at the same time releases the OC Edition GV-N960WF2OC-2GD and GV-N960IXOC-2GD. Each card is equipped with respective GIGABYTE technologies and innovations for all various gaming needs.

The GV-N960WF2OC-2GD is reinforced with WINDFORCE 2X cooling system with two 90mm unique blade fans to keep the graphics card extremely cool and quiet at peak performance. The card also features the new semi-passive fan design for creating a complete silent gaming environment.?Measuring 17cm in length, the compactly powerful GV-N960IXOC-2GD is the value variant of the GTX 960 ideal for applications based on budget builds.

Having three models available on the launch date, GIGABYTE offers the most complete GTX 960 graphics solutions for meeting the diverse gaming demands and requirements in this segment. 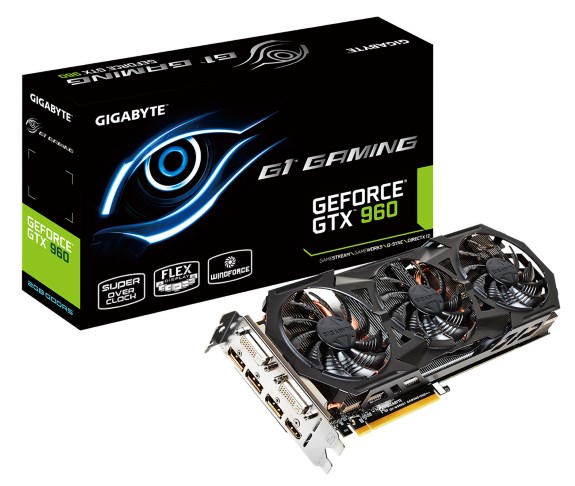