Tablet sales down for the first time in Q4 2014

Posted on Tuesday, Feb 03 2015 @ 14:10 CET by Thomas De Maesschalck
After years of booming sales the tablet market seems to have peaked a research firm IDC found that sales fell 3.2 percent year-over-year in Q4 2014 to 76.1 million units. All but one of the top five tablet shippers suffered huge shipment declines, Apple saw its sales decline by 17.8 percent, Samsung was hit 18.4 percent, ASUS is down 24.9 percent and Amazon was hit by a sledgehammer as the company's Kindle tablets sold 69.9 percent less units than the year before.

Interestingly, Lenovo managed to increase its shipments by 9.1 percent and the market is increasingly shifting towards a large number of smaller players. The "others" category on IDC's chart represents 35.2 million units, accounting for 46.2 percent of the tablet market in Q4 2014.

These smaller players, which individually are smaller than Amazon with its 2.3 percent marketshare, saw their shipments soar by 36.2 percent year-over-year. Presumably, consumers are flocking to alternative tablet makers as they desire to get their hands on cheaper devices with better or comparable specifications versus what's offered by Apple and Samsung at much higher price levels.

Amazon took the largest hit by far. The company shipped nearly 70 percent less tablets compared to the previous year, despite having introduced an updated Kindle Fire HDX 8.9. Consumers likely felt the company’s products didn’t offer enough functionality or app compatibility over competitors. While the tablets were cheaper than offerings from Apple, they still had to battle similarly priced Android tablets. 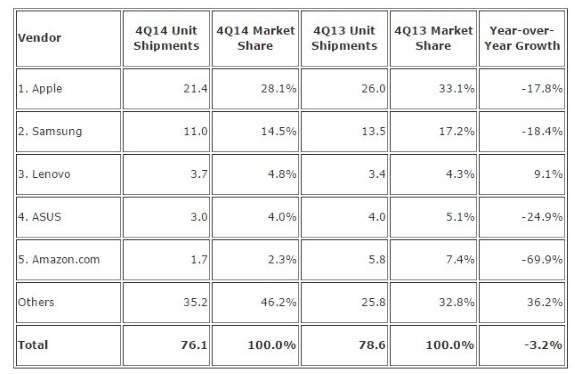 Source: The Next Web