Every once in a while there are report about counterfeit computer chips making the rounds. This time Overclockers3D issues a warning that fake AMD processors were being sold via Amazon UK.

The site says nefarious sellers fitted old AMD Athlon 64 X2 5200+ processors with a new heatspreader to trick consumers into thinking they got the AMD A8-7600. The counterfeit processors were sold in AMD A8-7600 packages, or at least decent forgeries as the buyer on Amazon didn't notice it was a fake just by looking at the box.

To make matters even worse, these processors are not pin compatible so attempting to install this incompatible CPU into your motherboard will likely damage it. A review on Amazon indicates the company handled the issue by sending a replacement CPU to one affected user. It's unknown how many consumers were affected by the counterfeit CPUs.

In the forged processors a heat spreader which looks like that of a AMD A8-7600 is placed on an older AMD CPU, likely from the AM2 socket, so on first glance many people do not recognize the CPU as a forgery, that is until installation. In addition, the fake CPUs were apparently sold in AMD A8-7600 packages, or at least some decent forgeries as the buyer on Amazon didn't notice it was a fake just by looking at the box. It is unknown at present if the AMD A8-7600 CPU is the only CPU that has been counterfeited, higher end Fake AMD CPUs could be out there. Amazon have issued a replacement CPU to the affected user according to their Amazon Review. We advise buyers of AMD CPUs to buy from known trustworthy retailers and to be careful to have a good look at your CPU before installation. 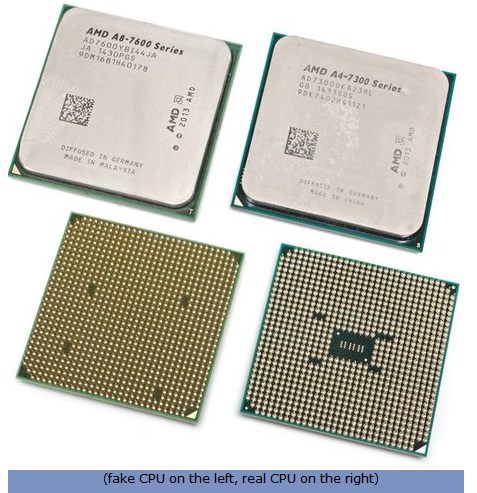 AMD responded that they're working with Amazon and local law enforcement to investigate the issue:

"It is apparent that this isolated incident is not related in any way to AMD's manufacturing or packaging, however AMD takes any reports of product tampering very seriously. As part of our ongoing efforts to help ensure consumers and businesses are sold only genuine AMD processors, we thoroughly investigate these extremely rare incidents in an effort to determine the source of the altered products, and consider all available legal remedies - including both civil and criminal prosecution - against persons found to have engaged in fraudulent actions affecting AMD products.

We are working in close cooperation with Amazon and the local enforcement authorities to conclude this incident quickly and ensure that the rigorous quality and reliability standards that AMD is known for are maintained. In addition, while AMD already implements extensive security measures to ensure the authenticity of our products, we are currently evaluating further measures to implement additional security measures for maximum future support."