One of the new bits of information about the AMD Radeon R9 390X is that the card is expected to feature an all-in-one liquid cooling solution from Cooler Master. Previous rumors pointed to a watercooling solution from Asetek but TweakTown speculates this could make sense as the site recalls AMD's FX-9590 processor initially shipped with an Asetek AIO cooler but was later fitted with a Cooler Master product that licensed the design of the cooler from Asetek.

We've previously reported that AMD would release its Radeon R9 390X with an AIO cooler from Asetek, just like it did with the Radeon R9 295X2, but this new information has Cooler Master providing the AIO cooler. Asetek had a recent order from an "undisclosed OEM" for a desktop video card that would ship in the first half of 2015, with the end product resulting in $2 million to $4 million in revenue for Asetek.

This would result in around 50,000 to 100,000 units, where soon after this, the information leaked on Asetek providing the AIO cooler for AMD. After a couple of months passed, we saw AMD re-release its FX-9590 processor with a Cooler Master liquid cooling unit, which replaced the previous unit that was made by Asetek. Cooler Master reportedly licensed the design of the cooler from Asetek, which should be a big hint at what is going on here.

Additionally, there's also a rumor from WCCFTech that the Radeon R9 390X may show up in four to six weeks from now which would imply a late March or early April launch. As we noted a week or two ago, a launch in this timeframe is a possibility as AMD hinted in its last earnings call that new GPUs and APUs would arrive starting in Q2 2015. 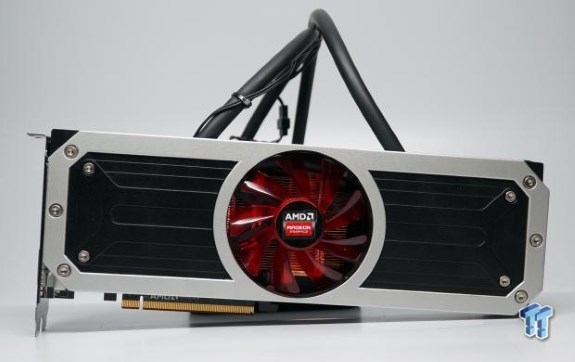