Posted on Wednesday, Feb 18 2015 @ 11:59 CET by Thomas De Maesschalck
A team of astronomers from the US, Europe, Chile and South Africa have discovered that 70,000 years ago a recently discovered binary star, which they nicknamed "Scholz's star", is likely to have passed through the Oort Cloud, our solar system's distant cloud of comets.

It's the closest known flyby of a star to the Solar System, the astronomers note the star's trajectory suggests it passed roughly 0.8 light years away, five times closer than Proxima Centauri, the closest star.

Most of the time Scholz's star would not have been visible by our ancestors, it's a 10th magnitude star which means it's about 50 times fainter than can normally be seen with the naked eye at night. The star is magnetically active, however, which can cause it to "flare" and temporarily become thousands of times brighter. During these rare flaring events, which could last for minutes or hours at a time, the star could have been visible to our ancestors. Full details at ScienceDaily.

Mamajek worked with former University of Rochester undergraduate Scott Barenfeld (now a graduate student at Caltech) to simulate 10,000 orbits for the star, taking into account the star's position, distance, and velocity, the Milky Way galaxy's gravitational field, and the statistical uncertainties in all of these measurements. Of those 10,000 simulations, 98% of the simulations showed the star passing through the outer Oort cloud, but fortunately only one of the simulations brought the star within the inner Oort cloud, which could trigger so-called "comet showers."

While the close flyby of Scholz's star likely had little impact on the Oort Cloud, Mamajek points out that "other dynamically important Oort Cloud perturbers may be lurking among nearby stars." The recently launched European Space Agency Gaia satellite is expected to map out the distances and measure the velocities of a billion stars. With the Gaia data, astronomers will be able to tell which other stars may have had a close encounter with us in the past or will in the distant future. 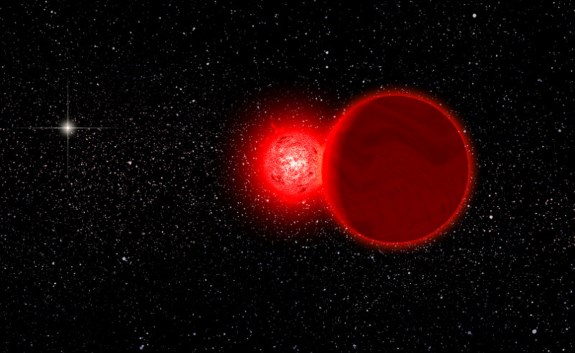