Several new power efficient technologies make their debut on the Carrizo APU. To deal with transient drops in voltage, which is known as droop, traditional microprocessor designs supply excess voltage on the order of ten to fifteen percent to ensure the processor always has appropriate voltage. But over-voltage is costly in terms of energy because it wastes power at a rate that is proportional to the square of the voltage increase; i.e. 10% over-voltage means about 20% wasted power.

AMD has developed a number of technologies to optimise voltage. Its latest processors compare the average voltage to droops on the order of nanoseconds, or billionths of a second. Starting with the Carrizo APU, this voltage adaptive operation functions in both the CPU and the GPU. Since the frequency adjustments are done at the nanosecond level, there’s almost no compromise in computing performance, while power is cut by up to 10 percent on the GPU and up to 19% on the CPU. Another power technology that debuts in Carrizo is called adaptive voltage and frequency scaling (AVFS). This technology involves the implementation of unique, patented silicon speed capability sensors, and voltage sensors in addition to traditional temperature and power sensors. The speed and voltage sensors enable each individual APU to adapt to its particular silicon characteristics, platform behaviour, and operating environment. By adapting in real-time to these parameters, AVFS can lead to up to 30 percent power savings.

In addition to helping reduce power use on the CPU by shrinking the core area, AMD worked to optimise the 28nm technology for power efficiency, and tuned the GPU implementation for optimal operation in power-limited scenarios. This enables up to a 20% power reduction over the Kaveri graphics at the same frequency. Combined, AMD’s energy efficiency innovations aim to deliver power savings on the order of a manufacturing technology shrink while staying in a well-characterised, cost-optimised 28nm process.

Further details can be read at eTeknix. 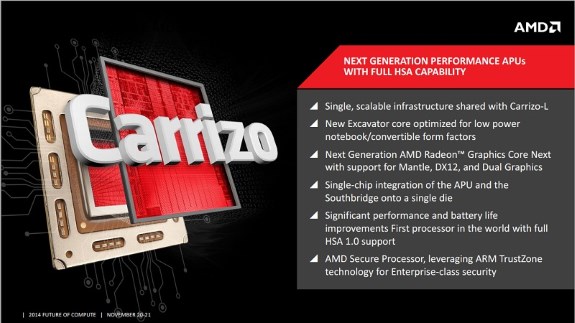