Posted on Monday, March 16 2015 @ 14:22 CET by Thomas De Maesschalck
ASUS introduces the TUF Sabertooth X99, a new motherboard in the firm's line of boards that focus on reliability and stability. The Sabertooth X99 has the usual TUF features, including Fortifier, 2nd generation Thermal Radar and Thermal Armor, as well as some new things like TUF Detective, an app that lets you monitor and control system information via your smartphone.

With the addition of the Hyper Kit expansion card, TUF Sabertooth X99 gives users the freedom to fit next-generation 2.5-inch SSDs with mini-SAS HD. This exclusive technology exploits the maximum PCI Express 3.0 x4 bandwidth of 32Gbit/s for SSD transfer speeds that are up to 3.5X faster than traditional SSDs.

All-new TUF Detective
TUF Sabertooth X99 is the first TUF motherboard to include TUF Detective, a free companion app that puts detailed system information at users’ fingertips. With the intuitive app installed on a smartphone or tablet, users are able to monitor key parameters, detect and diagnose errors and control the PC’s power status with touchscreen ease. The PC doesn’t even need to be switched on for the app to be useful.

Exclusive TUF technologies for ultimate cooling
TUF Sabertooth X99 is engineered to stay cool. TUF Thermal Armor technology is an exclusive cover with a fan to boost airflow across the system for maximum heat dissipation. The latest edition of TUF’s easy-to-use Thermal Radar 2 software enables users to control up to 11 fan connectors, as well as manage fans attached to ASUS graphic cards. This makes quick work of fan tuning for complete system cooling, enabling users to enjoy the perfect balance between quietness, cooling and performance.

Exclusive TUF Fortifier technology is a reinforced backplate with a thermal pad that both strengthens the motherboard and efficiently directs heat away from the back of the 8+2-phase Digi+ voltage-regulator module (VRM) and other critical components — an innovation that reduces operating temperatures by up to 6°C.

All TUF motherboards, including TUF Sabertooth X99, are built with components certified for military use and undergo serious server-level burn-in tests, including over 7,000 hours of compatibility checks with over 1,000 devices — and ever board is covered by TUF’s five-year warranty. 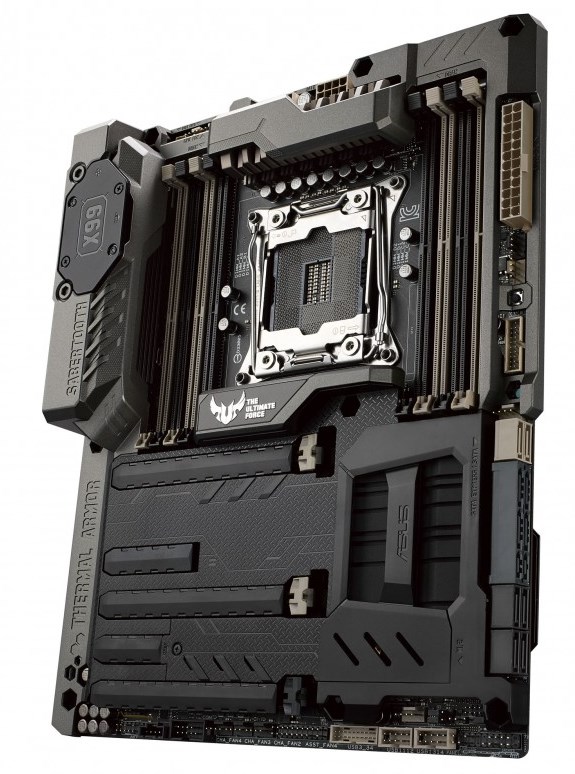