The type of mechanical switches isn't mentioned so we assume it's an unknown third-party brand. The keyboard is immediately available in the US for $149 via Amazon and Newegg.

Full Spectrum, Full Customization
The Lobera Spectrum allows gamers to individually customize virtually any color, to any key. With 9 different LED effects, such as dimming, full zone, trigger, ripple, firework, radiation, rainbow wave, and per key customized mode as well as 5 levels of brightness and 5 distinct profiles to store them. There are endless combinations for a truly unique configuration.

Audio Mode
When Audio Mode is activated, the LEDs of each individual key dance to the beats and bass of your favorite tunes.

Switchable N-Key Rollover / USB 6 Key Rollover
Allowing gamers to switch between N-Key Rollover (NKRO) and USB 6 Key Rollover, the Lobera Spectrum is immune to ghosting or jamming issues. A fast 1000Hz polling rate helps makes sure no keystroke is missed, and with instant game mode switching, users don’t have to worry about accidental key presses taking them away from the heat of battle.

USB and Audio Jack Pass-Through
The Lobera Spectrum comes with a pass-through hub with audio/mic jacks and 2x USB 2.0 ports with a DC-in jack allowing gamers to charge their smart phones and tablets directly through the keyboard.

Instant Recording / 512kb Built-in Storage
Gamers are able to instantly program macros across the whole keyboard on the Lobera Spectrum. Profiles can be switched in just a couple keystrokes, and all the media keys are accessible with one hand. Built-in storage gives players the freedom to carry their preferences with them, even on different computers, preventing any tedious reprogramming.

Price and Availability
The Tesoro Lobera Spectrum is available now in North America at Amazon and Newegg for the suggested retail price of $149 USD in Kailh Blue, Black, Brown and Red mechanical switches.

While supplies last, those who order the Lobera Spectrum will receive a free Virtus.Pro X3 or Aegis X3 mousepad. The offer is only available till the end of March. 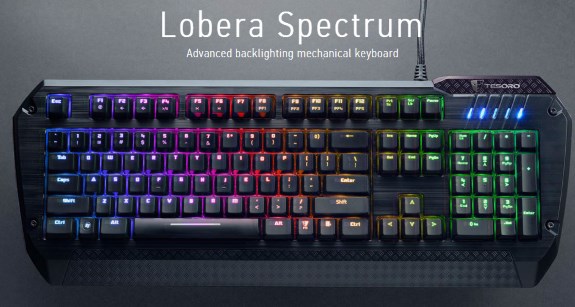