Even though computer enthusiasts are increasingly skeptical about triple-bit-per-cell NAND flash memory due to long-term endurance issues, Samsung keeps improving the technology and just released a 128GB TLC NAND flash eMMC 5.0 memory chip for mobile devices. This new chip promises read speeds of up to 260MB/s and random read and write performance of 6,000 and 5,000 IOPS, respectively.

“With the introduction of our value-focused, 3-bit NAND-based eMMC 5.0 line-up, we expect to take the lead in the expansion of high-density mobile storage,” said Dr. Jung-Bae Lee, Senior Vice President of Memory Product Planning and Application Engineering Team, Samsung Electronics. “We are continuing to enhance our next-generation embedded mobile memory offerings with improved performance and higher densities to meet increasing customer demand across the mobile industry.”

While flagship smartphones are already transitioning to 128GB memory storage based on Universal Flash Storage (UFS) 2.0 or eMMC 5.1 standards, mid-market smartphones will now be able to increase their storage capacity to 128GB as well. Samsung’s new 3-bit 128GB eMMC 5.0 memory speeds up this transition as the industry’s highest density eMMC 5.0 solution.

The new 128GB eMMC 5.0 delivers 260 megabytes per second (MB/s) for sequential data reading, which is the same level of performance as that of MLC NAND-based eMMC 5.1 memory. For random data read and write operations, it can handle up to 6,000 IOPS (input/output operations per second) and 5,000 IOPS, respectively, which is sufficient for supporting high definition video processing and advanced multi-tasking features. These IOPS speeds are approximately four and 10 times faster, respectively, than those of a typical external memory card.

With the new 3-bit eMMC 5.0 line-up, Samsung has extended its 3-bit NAND business from SSDs for data centers, servers and PCs to the entire mobile memory storage market. Samsung will continue to broaden its application of 3-bit NAND Flash memory by developing higher-performance and higher-density solutions, as well as strengthening the competitiveness of its memory business. 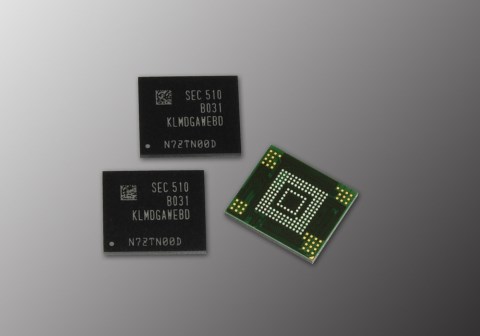