AMD FreeSync hits the market, 11 displays to be available soon

AMD officially introduced its FreeSync technology in the US. The Tech Report writes a total of 11 FreeSync-compatible screens are coming to market soon and several of these are already available. A list of the displays can be found below, as well as the list of AMD GPUs and APUs that support FreeSync.

For instance, the BenQ XL2730Z is selling at Newegg for $629.99, and it kind of tells the story of FreeSync in a nutshell. It's a 27" monitor with a resolution of 2560x1440. The panel is of the TN variety and supports refresh rates from 40Hz to 144Hz with claimed 1-ms gray-to-gray response times.

Those specs are almost an exact match for our favorite G-Sync monitor, the Asus ROG Swift PG278Q, which is currently going for $779.99 at the 'egg. 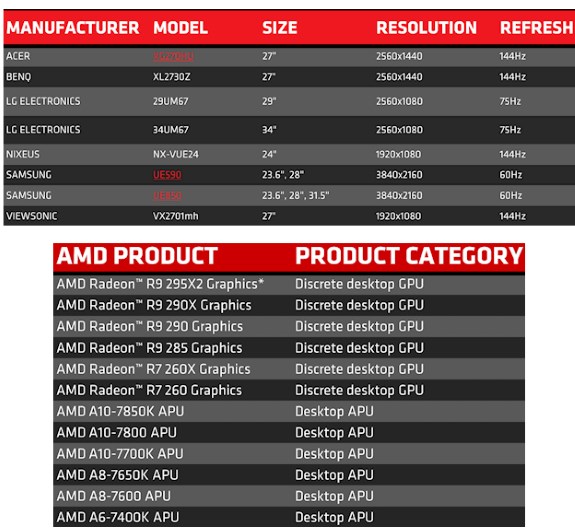 By the way, gamers with CrossFire are out of luck until some time in April when AMD plans to release a driver to enable FreeSync on CrossFire configurations. AMD's Catalyst 15.3 beta with full FreeSync support for single-GPU setups is expected very soon.