MSI 970A SLI Krait Edition is first AMD board with USB 3.1

Posted on Wednesday, Mar 25 2015 @ 16:25 CET by Thomas De Maesschalck
Demand for AMD motherboards isn't what it used to be but in case you're keen on building a new AMD-based gaming system, MSI offers the 970A SLI Krait Edition. This is a pretty sexy black & white keyboard that claims to be the first AMD-based motherboard with USB 3.1 support. This motherboard supports the AMD FX-8000 series and packs a USB 3.1 controller made by ASMedia. Pricing and availability is unknown.

MSI, world leading in motherboard technology, is proud to announce world’s first USB 3.1 featured AMD motherboard, the classy black & white 970A SLI Krait Edition. Delivering blazing fast USB performance, up to 2 times faster than USB 3.0, the new 970A SLI Krait Edition motherboard offers two USB 3.1 ports, which are fully backwards compatible with USB 3.0 and USB 2.0 devices. Copying files from your external hard disk or USB pen drive will be faster than ever. Offering reliable and fast Gigabit LAN together with Nvidia® SLI™ and AMD® CrossFire™ support for enthusiasts looking to pair up multiple graphics cards, the new classy black & white 970A SLI Krait Edition motherboard is a testament of quality. Military Class 4 provides all the stability you need through carefully selected and thoroughly tested components and materials.

“AMD and MSI strive to deliver innovation and great products that provide cutting edge features and capabilities for all users,” said Darren Grasby, AMD Corporate VP, Global Channel Sales. “We are very excited to partner with MSI on the launch of the new USB 3.1 powered 970A SLI Krait Edition Motherboard - a highly optimized, feature-rich platform that unleashes the full potential of AMD processors in a powerful solution that also delivers great value and customer experience.”

The 970A SLI Krait Edition motherboard perfectly caters to those AMD fans who are looking for something different in terms of design and latest specification, but desire nothing but the best in terms of features and power.

USB 3.1 2x faster
USB 3.1 allows for speeds up to 10 Gbps, doubling the speed compared to USB 3.0 and 20x faster than legacy USB 2.0. USB 3.1 is even faster than SATAIII! Transferring your favorite games, albums and movies over USB has never been faster.

Optimized for multiple graphics cards
The MSI 970A SLI Krait Edition motherboard supports multi-GPU and with enough space for an optimal airflow when using multiple graphics cards. That way, there is no need to worry about heat issues, while enjoying the best graphics jumping off from your monitor when running an Nvidia® SLI™ or AMD® CrossFire™ gaming setup. 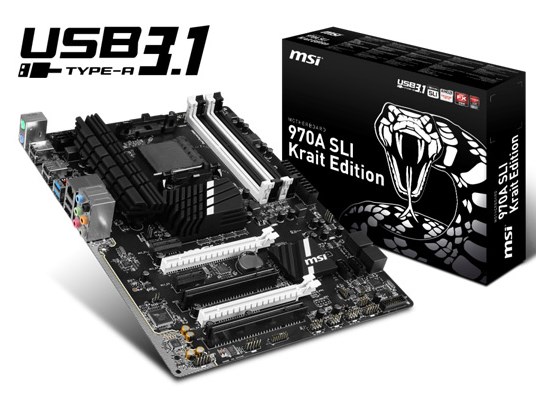