AMD 2015/2016 desktop processor roadmap leaks, next high-end part is not an APU

Please ignore the information below as AMD has announced that these leaked slides are fabricated.

Here's yet another leak from AMD's upcoming Financial Analyst Day presentation. We have no way to verify the accuracy of these reports but so far we have no reason to doubt its legitimacy. The source could be someone close to AMD or perhaps these could even be intentional leaks to try to generate some enthusiasm for the company after the weak financial results from earlier this month.

The slide reveals AMD's plans for the desktop market this year are rather lackluster. The high-end performance market will still be served by the old 32nm Piledriver while the 28nm Beema SoC continues to serve the lower-end of the market. Next month we're expected to see the rollout of Godavari, which is expected to be little more than an updated version of Kaveri with slightly higher CPU and GPU clockspeeds.

Next year is shaping up to be pretty interesting on the other hand with completely new offerings based on the 14nm Zen core! Summit Ridge will be the new high-end offering, it will feature two Zen quad-core units to deliver a total of eight cores. Unlike what was previously believed, Summit Ridge will not be an APU. The slide suggests this high-end part won't have integrated graphics.

Bristol Ridge is a new SoC APU for mainstream desktops and performance all-in-one systems, it features a single Zen unit with up to four cores, next-gen GCN graphics compute units, HSA 1.0 support, AMD TrueAudio, and AMD Secure Processor support. Summit Ridge and Bristol Ridge will both use the FM3 sockets.

For the lower-end and the small form factor segment of the market we have Basilisk, this SoC will have up to two Zen cores and has a feature set similar to Bristol Ridge. The main difference is that Basilisk is not socketed, it's soldered to the motherboard. 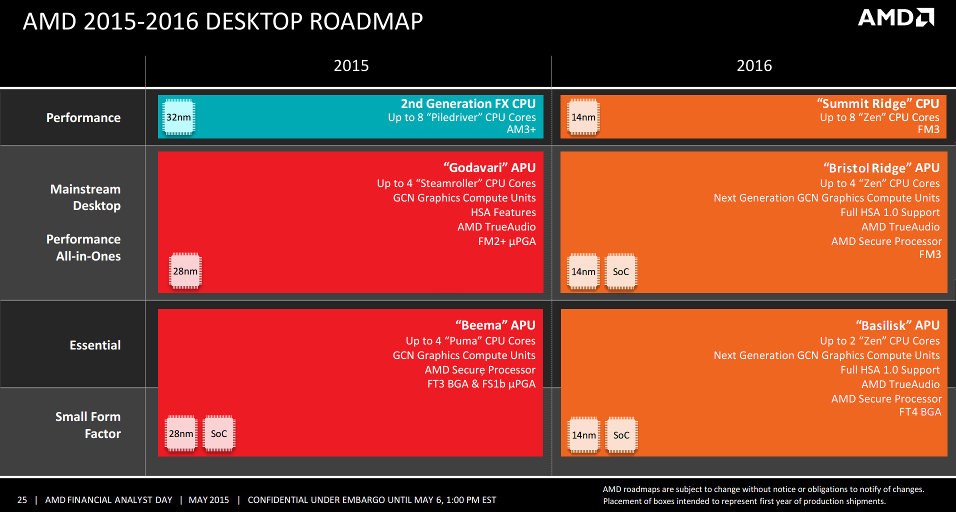