EE Times has written an article discussing the road to Samsung's 14nm process and how the firm has shrunk the lag for its 14nm to about 6 months when compared to industry leader Intel. You can read it over here.

Samsung’s migration from 45nm to 14nm is shown below in Figure 10, along with the comparable progression achieved by Intel over time. Our time axis is taken to be when we first received samples in our lab, which may lag the first release date of product by a few months. The Intel data has been fitted with an exponential trend line that shows the slowdown in release of the newest process nodes, reflecting the difficulties in achieving good yields for the smaller process geometries.

Samsung has lagged Intel in the release of its process nodes, especially the release of their 20nm node that was more than two years behind Intel. Remarkably, Samsung has shrunk the lag for its 14nm to about 6 months. 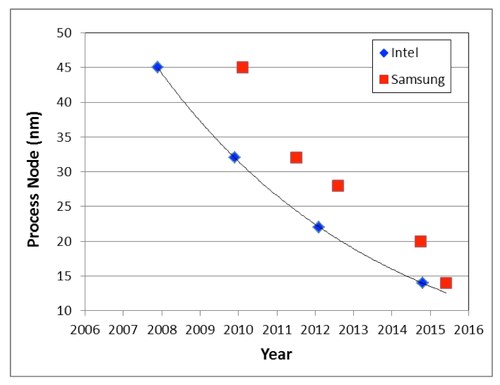