Posted on Tuesday, May 19 2015 @ 15:58 CEST by Thomas De Maesschalck
Two new product announcements from CRYORIG today. First up is the company's CUSTOMOD, a line of colored heatsink covers for its R1 Universal and R1 Ultimate heatsinks. You'll be able to buy these in red, blue, green, orange, and the original black and white.

CRYORIG also announced CRYO-Paste, a new line of thermal compounds. It includes the CP15 "everyday paste of choice", the CP7 which balances thermal performance, spread and particle density, as well as the CP7, which offers the best thermal conductivity (9.3W/mK) but is harder to spread due to its higher viscosity. Each CRYO-Paste kit includes a 4g syringe, a plastic spreader and an Alcohol Pad that contains 70% pharmaceutical grade isopropyl alcohol to clean the heatspreader of the CPU.

Ahead of Taipei Computex in June, computer cooling innovator CRYORIG is releasing information of two new product lines, the CUSTOMOD line of customization accessories and a new line of CRYO-Paste thermal interfaces. These two new lines are one of the many new items that will be shown at CRYORIG’s booth during the coming Computex beginning June 2nd, 2015.

CRYORIG in an act of pushing forward true aftermarket modding and customization possibilities release it’s brand new CUSTOMOD line of colored heatsink covers for it’s critically acclaimed R1 Universal and R1 Ultimate heatsinks. The CUSTOMOD Cover for R1 will initially come in 6 different colors, Red, Blue, Green, Orange and the original Black and White. Each CUSTOMOD Cover pack comes with two covers for you to match your R1 series heatsink with your PC rig. The high quality finish of the CUSTOMOD Covers has a near metallic feel, fitting perfect with high-end boards from each major mainboard brand. The CUSTOMOD line will not end with the Covers for R1. CRYORIG plans on introducing many other colors and different coating finishes for the R1 and also for other heatsink models. The CUSTOMOD line will be a stand-alone accessory line for PC users that want the most options to switch and match their PC setup. Currently there are no plans to release fully colored heatsink products.

Working with some of the most well known PC Build/Mod Photographers in Europe, CRYORIG will be featuring the amazing work from Malik Customs, Kurpiewski Concept and many more, to show off the customization possibilities of the CUSTOMOD Covers for R1.

Also being released alongside the CUSTOMOD line of products during Computex will be three new CRYO-Paste thermal interface products, the CP5, CP7 and CP15. Each will feature different characteristics, and will be leveled based on Thermal Performance, Spread Ease and Particle Density. The CP5 will be the absolute best in Performance and Particle Density that CRYORIG has ever had. While CP7 will be a good combination of Performance and easy to apply and spread. The CP15 is extremely easy to apply and is perfect for entry level users. A mini spreader that’s specially designed for CPU application is also included, as well as an alcohol pad to clean the CPU surface for a pristine application.

The CUSTOMOD Cover for R1 and the CP5/7/15 will all be on show at Taipei Computex 2015, at Nangang Exhibition Center booth J1318. Both lines will be available worldwide summer, 2015. 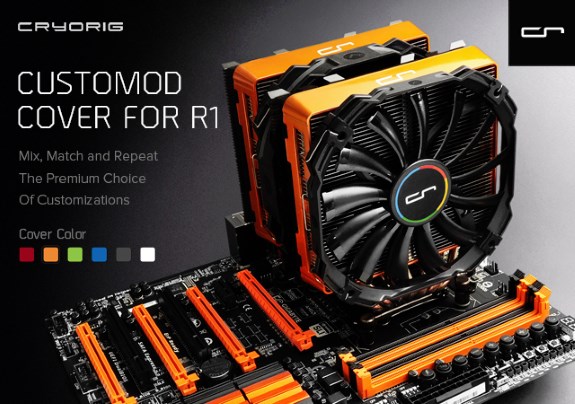 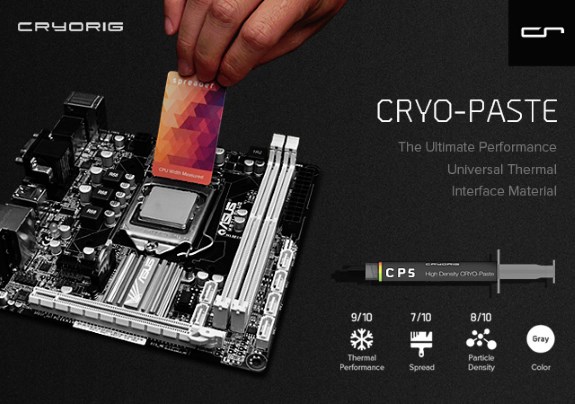