Biostar to show off Intel 100 series based motherboards at Computex

Posted on Friday, May 22 2015 @ 11:18 CEST by Thomas De Maesschalck
Biostar announces it will be showcasing motherboards based on the Intel Z170, H170, and B150 chipsets at next month's Computex show. One of these will be the GAMING Z170X4, which is pictured below.

Computex, Asia’s largest high-tech event, will run from June 2nd to the 6th this year in Taipei, Taiwan and BIOSTAR will be showcasing upcoming Intel 100 series chipset motherboards, gaming oriented motherboards and VGA cards as well as mini PCs designed for Karaoke and IPC Embedded solutions. Attendees are all invited to talk to BIOSTAR representatives at their location at the Nangang Exhibition Hall 4F at Booth L1017A.

On display will be the Intel Z170, H170, B150 chipset based motherboards that support 6th Gen Intel® Core™ Processor family (codenamed Skylake). More information will be revealed at Computex, so make sure to come by and see the exclusive hardware. Also, this year BIOSTAR will be partnering with Thermaltake who will be sponsoring some of the gaming peripherals like cases, power supplies, CPU fans, keyboards and mice, so visitors will be able to get their hands on running hardware to see, touch and experience the full effect.

The BIOSTAR booth will be showcasing the Gaming Z97X motherboard along with the GTX 960 graphics card. The Gaming Z97X features dual LAN (Killer & Intel) for high performance LAN connections, onboard high-speed interfaces such as USB3.1, PCIe M.2 and SATA Express, and in-house Hi-Fi technology for the best crystal clear sound experience.

The Gaming Z97X is the first complete gaming motherboard designed by BIOSTAR and is designed from the ground up to be cool looking and high performing. It comes with BIOSTAR’s exclusive Super Hi-Fi Audio technology and support for DisplayPort. Two on-board HDMI supports 4K and 2K resolutions.

This board also heralds the launch of the BIOSTAR external Gaming Commander box. It fits in a standard 5.5" (CD-ROM) area; it is also comprised of software with voice control center exclusively designed by BIOSTAR. The external box features an independent USB DAC, dedicated MIC_IN and Line-out jacks, buttons for volume adjustments, a diagnose LED for CPU/ DDR/ VGA temperature indicators, and exclusive XLouder button for quick MIC boost. The Gaming Commander software is a user friendly interface with equalizer functions which allows users to make their own voice effects while enjoying games.

With the Gaming Z97X BIOSTAR has prepared two LAN connectors, with the most popular Killer LAN and Intel LAN chips. With Dual GbE LAN, the primary advantage is doubling bandwidth from 1G to 2G, and with two high-speed gigabit networks plus zero packet delay that provides super high data transmission efficiency. Another major advantage is "Load Balancing", it allows a gamer to attach both network adapters to a single network. It will therefore support the aggregation "teaming" function by merging the two connections to support multiple aggregation modes. In addition, two Gigabit Ethernet lightning protection circuits reduce the probability of damage from lightning or other power surge, so if one connection is disabled the other connection will automatically kick in.

The Gaming Z97X looks cool and sharp with the armor design and there are a lot more great features like the LN2 switch, T-Overclocking software & an onboard XMP button for easy CPU and memory overclocking. BIOSTAR hopes you can come by to experience it yourself at Computex. 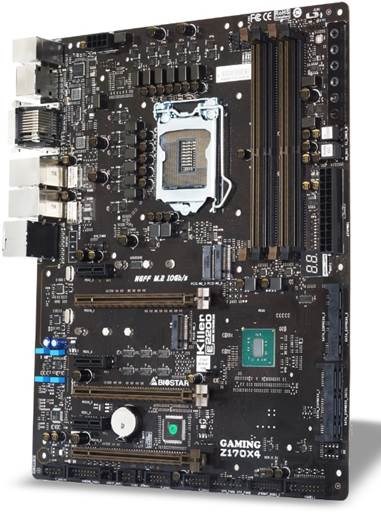