CPU World took the time to create a nice table with everything we know about the specifications AMD's Godavari APUs. According to earlier reports, these chips are expected to be officially introduced tomorrow.

An updated spec sheet, that includes all Godavari SKUs, is provided further below. Model numbers and features, that are different from preliminary specifications, are in bold. We believe that the A8-8650K and A10-8850K will be released under A8-7670K and A10-7870K names respectively. The A6-8550K unlocked SKU was probably replaced by the A6-8550 model. Most of Accelerated Units will be available only in OEM desktop PCs and All-In-One computers, but a couple of models should be offered as boxed products. The A10-7870K was available for sale in US since last week, and we may eventually see boxed A8-7670K and Athlon X4 870K APUs. 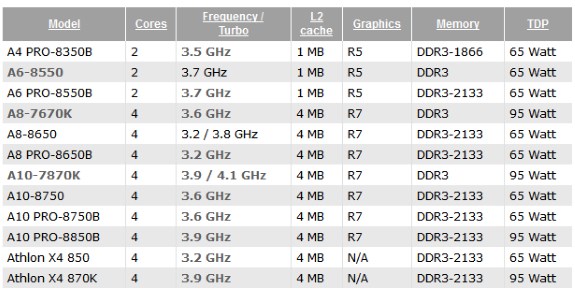