The long-awaited Fiji GPU turned out to be a dud so outside the Radeon R9 Nano the next big thing on AMD's radar is Zen. The first iteration of Zen is expected to be released sometime in the second half of 2016 in the form of Summit Ridge, this will be a high-end platform with up to eight cores.

The first mainstream Zen-based APUs aren't expected until around mid-2017 in the form of Raven Ridge, meaning AMD's poor position in the mainstream processor market will remain relatively unchanged for the next two years. While next year's Bristol Ridge promises about 10-15 percent improvement versus the current Kaveri APUs, the future Zen chips are anticipated to offer around 40 percent higher performance than existing APUs at the same clock frequency.

Summit Ridge, Bristol Ridge and Raven Ridge all use AM4 and support DDR4 memory.

Next year AMD will offer its “Bristol Ridge” accelerated processing units for mainstream PCs with up to four “Excavator” cores and Radeon graphics with GCN 1.2 architecture. The chip will be based on the “Carrizo” architecture, but will run at higher clock-rates and will this feature considerably higher thermal design power. Since AMD’s “Bristol Ridge” will essentially use current-gen technologies, it will offer 10 – 15 per cent performance improvement compared to existing “Kaveri” APUs in the best case scenario.

AMD will release considerably more advanced “Raven Ridge” APU in 2017, according to AMD’s roadmap, which was revealed by BenchLife. Nothing particular is known about the chip right now, except the fact that it will be based on “Zen” micro-architecture and will thus offer considerably – by around 40 per cent – higher performance compared to existing APUs at the same clock-rates. 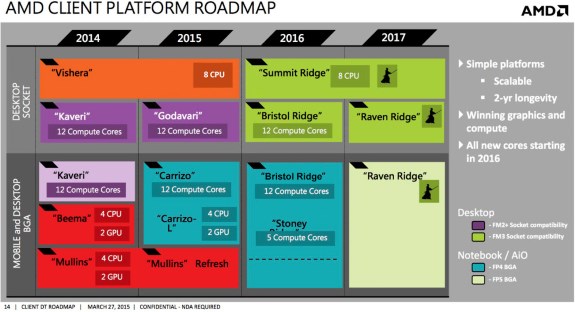