Posted on Friday, Jul 03 2015 @ 10:53 CEST by Thomas De Maesschalck
Multi-GPU gaming is a pretty niche market but it seems it's bigger than I thought. FUD Zilla received word from a trusted source that there are around 300,000 gamers with a SLI or CrossFire system.

What we have been preaching for a while these 300K people really know what they are doing, most of them at least. These are usually super high end enthusiasts, spending a lot of time on forums, comment sections of tech websites. They are very opinionated and they are really passionate about who they support - AMD or Nvidia.

In case you are one of these 300,000 you should feel special, as not too many people spend $1,000 to $2,000 on two GPUs. In case the game supports it, and in case that the driver is there, there is no doubt that two cards are better than one. The big obstacle is that two cards e.g. Fury X usually cost twice as much as one Fury X card. The same logic applies to GTX 980 TI cards, and let's not forget that you also need a better PSU, chassis and so on.

It's hard if not impossible to find details about which cards are the most popular in multi-GPU systems and unfortunately the Valve Steam Survey provides no details about this. It is quite interesting though that five out of ten of the most used graphics solutions are made by Intel.

The most popular AMD graphics card ranks eight with a marketshare of 1.89 percent, it's the Radeon HD 7900 series.

Here's an overview of the most commonly used GPUs in June 2015: 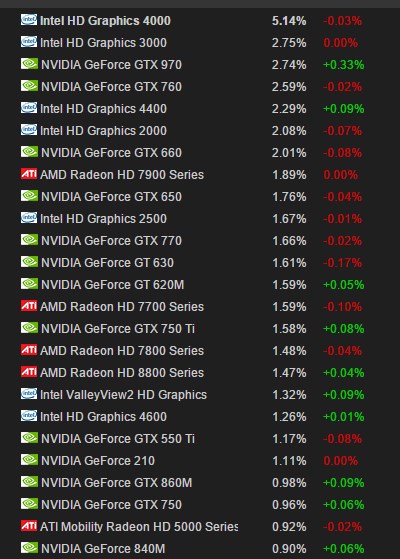