Leaked Intel drivers reveal the naming of the GPU components of Intel's upcoming Skylake processors. As seen in the overview from MyDrivers, it appears the chip giant is cleaning up its graphics naming mess with a more logical structure.

With the Haswell and Broadwell naming schemes, it is often hard to distinguish what is better than the other as higher numbers aren't always better than lower number models. With the new Skylake naming scheme things simplify quite a bit, these graphics chips use a simpler three digit structure that more closely reflects the performance level.

According to a blog post from MyDrivers, the HD Graphics will remain the base graphics models, which can be found on the Celeron and Pentium CPUs. The HD 510/515/520/530/535/540 will represent the common multimedia-oriented graphical solutions found on the Core iX models. They will come with various frequencies, so be sure to check the CPU out before you buy it.

The Iris 550 is said to be the higher-level solution found in high-end smartphones, while the Iris Pro 570/580 are found in the top-of-the-line K Desktop models and smartphone models. They are rumoured to boast an embedded catch of 64 MB or 128 MB, depending on the CPU model. Finally, we have the HD P530 and Iris Pro P580, which can be found on the Xeon E3 product line and corresponding desktop version. 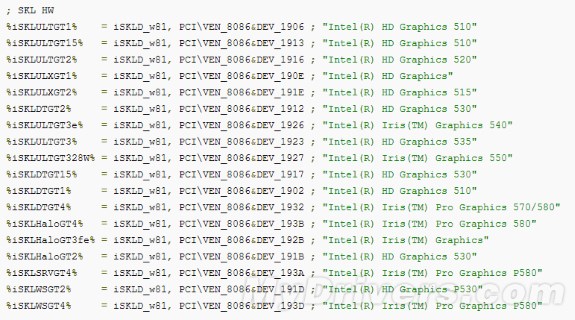