Posted on Tuesday, Jul 07 2015 @ 12:12 CEST by Thomas De Maesschalck
Semico Research notes TSMC is on track to overtake Intel in terms of capital expenditure (capex) this year. Overall capex in the semiconductor market is expected to reach a record high of $68.7 billion, up 9 percent from 2014's $63.3 billion.

Just like last year Samsung is expected to be making the biggest investments, the firm is ramping up its capex to close to $15 billion, while TSMC is expected to hit $10.8 billion, about $1 billion less than previously expected due to "capital efficiency" achieved by a faster ramp from 20nm to 16nm.

Intel on the other hand reported a 2015 capex of just $8.7 billion, about $1 billion less than the previous outlook. The reduction in capex is attributed to better yields and utilization and it seems Intel is holding off spending as it's waiting for EUV tools to reach maturity.

Some highlights to bring color to the numbers:

#1: Samsung’s latest fab announcement is a $14.3 billion fab (15.6 trillion won) at a ground-breaking ceremony May 7. Not all of this announcement was actually news. The company signed an MOU to build the fab in October 2014. The fab will be finished in 2017, with initial production beginning in the first half. This is accelerated timing compared to the October 2014 announcement that said initial operations were to begin in the second half of 2017. Samsung expects this fab to be the industry’s largest in terms of capacity. The site size is 790,000m2. The company is being coy with the products it intends to make there, saying it is targeting the mobile, server, and IoT markets. This seems to imply mobile and server DRAM along with other chips (sensors? processors?) for the IoT.

#2: TSMC announced its 2015 capex has been reduced by $1 billion to a midpoint of $10.8 billion. The reduction is due to “capital efficiency” achieved through faster conversion from 20nm to 16nm, allowing for an increase of 16nm capacity while 20nm capacity is decreased.

#3: Intel is reporting a decrease in capex for 2015 to a midpoint of $8.7 billion, which is down by over $1 billion from the prior outlook. This is based on better yields and utilization that they have achieved. They did point out that this is not the start of a trend of reduced capex for them. No mention has been made of Fab 42, a shell built in Arizona that has been on hold since January 2014.

#4: GLOBALFOUNDRIES is increasing capex by about US$1 billion, almost all of which is towards the 14nm ramp at the New York fab.

#11: SMIC will be ramping up two new fabs in the second half of 2015. SMIC is qualifying 40nm and 28nm initial production at its new 300mm Beijing B2 fab. It will be able to run 35,000wpm when fully outfitted with equipment. SMIC is also adding 20,000wpm 8” capacity in Shenzhen. The initial 10,000wpm will begin commercial production in 3Q15, and another 10,000wpm added by the end of the year. The ramp will continue into 2016, as company executives expect continued shortages of 8” capacity. SMIC is increasing total capex by 50% to $1.5 billion this year. For the Beijing fab, $800 million will be spent to add 12” capacity. Another portion will go toward expanding 8” capacity in Shenzhen. 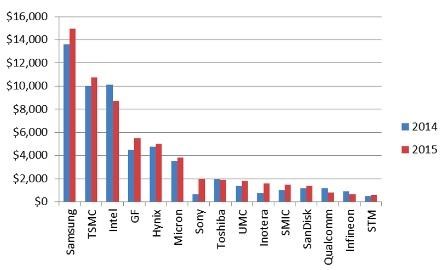