We hear OCZ's involvement in the creation of this SSD was very limited. As AnandTech reports in its review, this is basically a Toshiba SSD that retails under the OCZ brand as Toshiba doesn't directly engage in the retail market.

As such, more aggressive pricing is needed to sell the Trion 100 but we see Newegg is already offering a 17 percent discount on the 120GB unit so perhaps these disks may be interesting enough if you don't mind buying TLC NAND.

Designed for mainstream users with varying storage needs, the Trion 100 will be available in capacities of 120GB, 240GB, 480GB, and 960GB. Additionally, Trion 100 SSDs provide ample endurance with up to 240TB total bytes written (TBW), providing peace of mind for users.

“As the market for solid state drives continues to mature the need for high quality yet affordably priced drives has only grown, and we are pleased to be able to provide exactly that with our new TLC based Trion Series SSDs,” said Daryl Lang, CTO of OCZ Storage Solutions, a Toshiba Group Company. “To deliver more robust endurance, the Trion has been optimized with extremely tight coupling between the premium Toshiba TLC NAND flash and firmware, making it an ideal solution for value-conscious users seeking an improved computing experience for both desktop and mobile applications.”

Stringent reliability and quality procedures are incorporated into every OCZ drive; however, in the unlikely event that a drive needs to be replaced, Trion 100 is protected by OCZ’s ShieldPlus Warranty for 3 years. This industry-leading approach to service provides peace of mind with an elite, worry-free customer service experience which eliminates all the hassle and cost surrounding traditional support and warranty claims consumers often have to deal with. 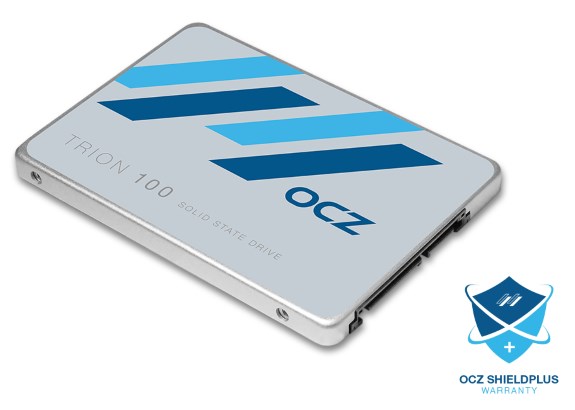